Widespread but uncommon resident and migrant to lower altitudes during winter months. Significantly more records in the cooler period of the year and clear elevational pattern indicating seasonal movements from the highlands to the lowlands and in and out of the city environs. Occurrence varies from year to year, but the reasons behind this remain unclear. Dependent on remnant dense forest habitat and cooler environs, both of which are threatened by climate change and increased development.

The Eastern Spinebill is a distinctive, small species of Honeyeater (family Meliphagidae) common in the south eastern states of Australia and well-known by birders and non-birders alike. It is found all along the coastline from Cairns to Adelaide inland to the western slopes of the Great Dividing Range, but is only patchily distributed in Queensland, favouring cooler regions at higher elevations. 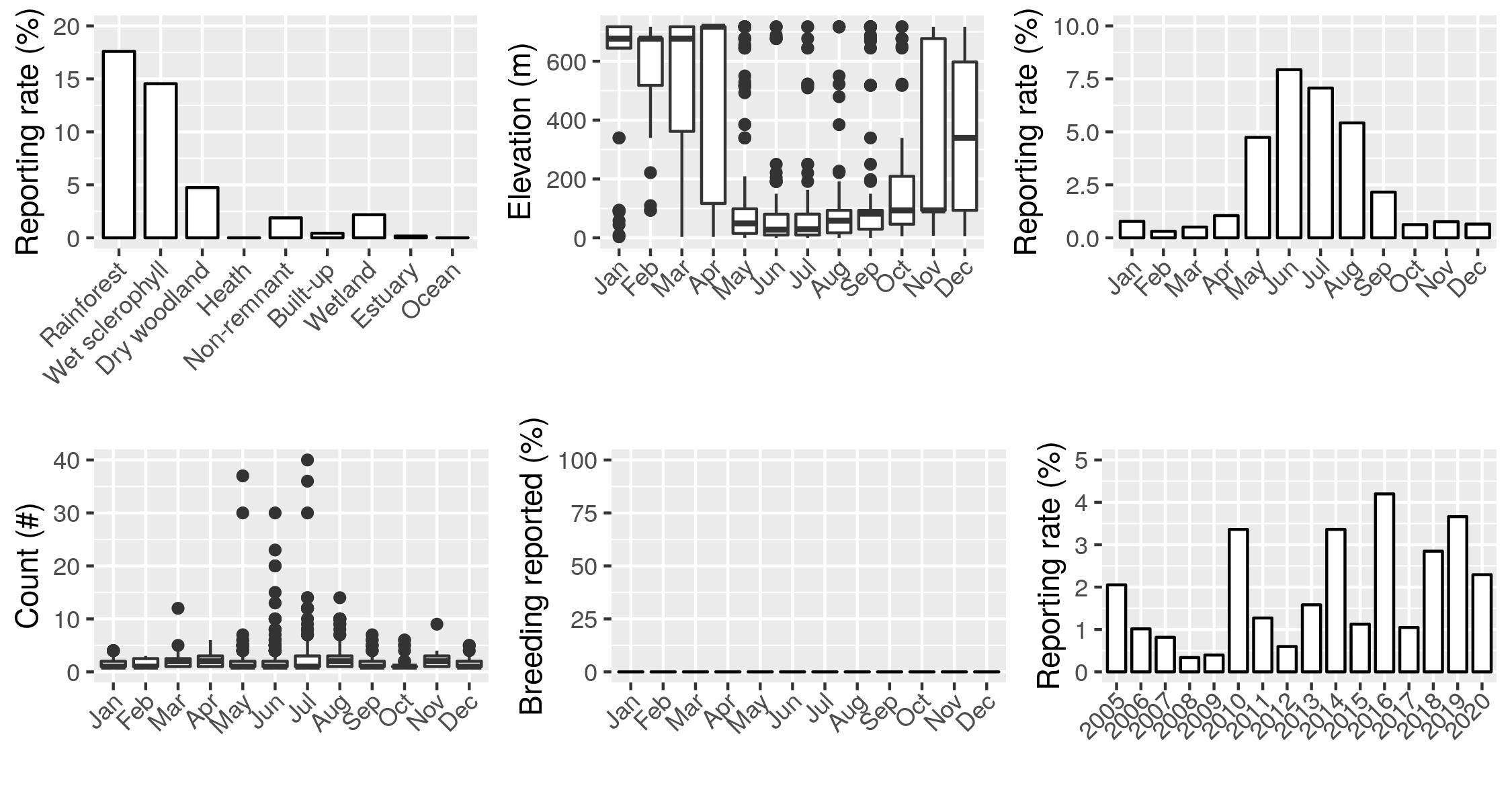 A boldly plumaged honeyeater found across much of the south east of Australia, the Eastern Spinebill is a favourite for many birders. While more common outside of Brisbane, the species is still reported widely within the LGA. There have been reports in all areas of the city barring Moreton Island and offshore, but the species is never regularly recorded at any one location, although it is more frequent in the wetter forests of the D’Aguilar Range, particularly near Mount Glorious. Breeding has never been reported in Brisbane, although it is possible some breed in the summer up in the hills. It appears the majority of the population move beyond the Brisbane region to breed. The species is usually recorded in small numbers, individuals or pairs, but counts of several dozen have been recorded during the winter months, with a high count of 36 at Tingalpa (Queensland 2012) - possibly a migrating flock.

Eastern Spinebills exhibit a significant level of migratory activity in Brisbane, being both altitudinal migrants (moving from the highlands in summer to the lowlands in winter) and locational migrants (average count and reporting rate are both significantly increased over the winter months). The current data suggests the majority of birds move beyond Brisbane’s environs over summer to breed, with perhaps only younger birds or non-breeders remaining behind in the higher parts of the city.

Eastern Spinebills have been recorded all across Brisbane, but never reach high levels of abundance in any one location. They show clear preference for wet sclerophyll and rainforest habitats, with secondary abundance levels in dry woodlands, non-remnant areas and wetlands. Given their regularity in parks and gardens across much of south eastern Australia, it is somewhat surprising that they are not more frequently reported in suburban habitats within Brisbane. However, given their need for native flowering plants and dense tree cover (Parsons et al. 2006), neither of which are found in most Brisbane gardens, this is likely the cause for their rarity. The species has never been reported out to sea or on Moreton Island, and is only scarcely reported in the marshy north east of the city. Spinebills show a clear elevational pattern over the course of the year, with the few summer records being almost exclusively from the D’Aguilar Range at Mount Nebo and Mount Glorious, while in the cooler months they can be found at much lower altitudes, with only a few birds remaining up in the hills.

Even in their most favoured habitat, wet sclerophyll, the species is only recorded on approximately 25% of checklists, indicating that spinebills are an uncommon species within Brisbane. Their geographic distribution within Brisbane is probably driven by their requirement for specific habitat and food types that are much more commonly found in the cooler, wetter parts of the LGA, although their dispersion across the entire region is indicative of their readiness to move in accordance with local flowering and nectar availability.

It is conceivable for birds to turn up anywhere in Brisbane with suitable amounts of nectar available, although they are restricted to only a handful of sites where they regularly occur. Outside the Brisbane region, Eastern Spinebills have been noted to avoid areas with large populations of Noisy Miners (Parsons et al. 2006), so given this species’ abundance in many parks and gardens across the city this is likely a key driver in the Spinebill’s distribution. More birding activity within the north west sector of the LGA, in particular the elevated forests of the Camel’s Head, is likely to turn up more regular locations where this species occurs.

Eastern Spinebills exhibit a large amount of seasonality within the Brisbane region. While they have been reported in all months of the year, they are significantly more common in the winter months between May and August, where they are reported in over 5% of all checklists, compared with less than 0.5% in the warmer months of the year. Additionally, the number of birds reported on any given checklist increases over winter, with all counts of over 10 birds at once being between May and August, although the average number of birds reported does not vary significantly over the year.

Breeding has never been reported in Brisbane, but it is unclear at the moment why this is. It seems likely based on current data that the majority of the population move beyond the Brisbane region to breed over spring and summer, with only a handful of birds (probably non-breeders and immatures) remaining in the higher parts of the city where it is cooler. It is also possible that the birds breed in the elevated wet forests of the D’Aguilar Range, which are mostly poorly surveyed, and as such this has not been reported yet, but this seems less likely. It would be good to collect movement and breeding data on this species to determine the behaviour of the birds.

Reporting rate for Eastern Spinebills over the years has varied markedly over the years, with no clear trend apparent. 2010, 2014 and 2016 were bumper years for this species in Brisbane, where they were reported in over 3% of all checklists, but in most years they are much less abundant, reaching peak levels of approximately 1% of all checklists. Such fluctuation in reporting rate is likely due to climatic conditions outside of Brisbane and nectar availability across their range causing movements of birds into the area. The species is not of any conservation concern as it is common across the majority of its range, but the population in Brisbane should be monitored, as the birds rely on wet temperate forests, a habitat which has declined in Brisbane with increased human presence.