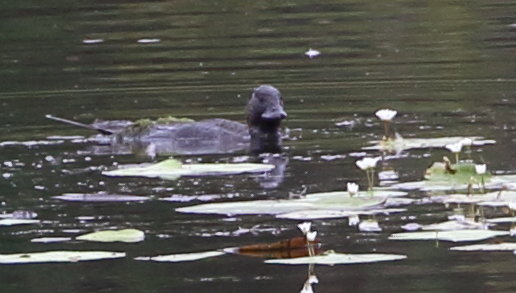 Rare vagrant to Brisbane. May be resident on Moreton Island, but any population once present has probably declined. Not of conservation concern.

One of Australia’s most curious and distinctive species of bird, the Musk Duck is a rare vagrant to Brisbane wetlands. Most records are of single birds in Brisbane, and this species is not particularly gregarious. Further records may come from anywhere there is suitable habitat.

Named for the distinctive odour that breeding males emit (Gray & Fraser 2013), the Musk Duck is one of Australia’s most distinctive endemic species, and is readily identifiable from any other species of waterfowl; the Freckled Duck is superficially similar in its plumage but is structurally very different. Within Brisbane, Musk Ducks are a rare vagrant, with only a handful of records, although some birds have been very long-staying - one individual at Dowse Lagoon was present for over 8 months.

Musk Ducks have been recorded from several locations around Brisbane, but repeat records are essentially unheard of to date. Interestingly, this species may have at one time been resident or semi-regular on Moreton Island (Vernon & Martin 1975); there are several contemporary records from the island, although more dedicated surveying of the isle’s many small lakes is needed to determine whether or not birds are still regular there or if they have died out.

Records of Musk Ducks have come from throughout the year, and it is difficult to confidently ascertain any seasonal trends in the presence of Musk Ducks in Brisbane. Unsurprisingly, birds have never been reported breeding in Brisbane. Further records could conceivably come from any month.