Scarce resident and presumed breeder in remnant habitat around the city. Birds are typically inconspicuous at daytime roosts but can be heard calling at night when they are active. Likely underreported and more common than currently indicated in the data. Not of conservation concern.

The Australian Owlet-nightjar is a small, distinctive nocturnal bird found across nearly all of Australia, with grey, barred upperparts and a white front. It is the smallest nocturnal bird species in the Brisbane region. It is often first identified by its call, a rather pleasing, if grating, churring sound given regularly throughout the night. Birds can be found in most remnant habitats across Brisbane, but are most common in wooded areas including rainforests. 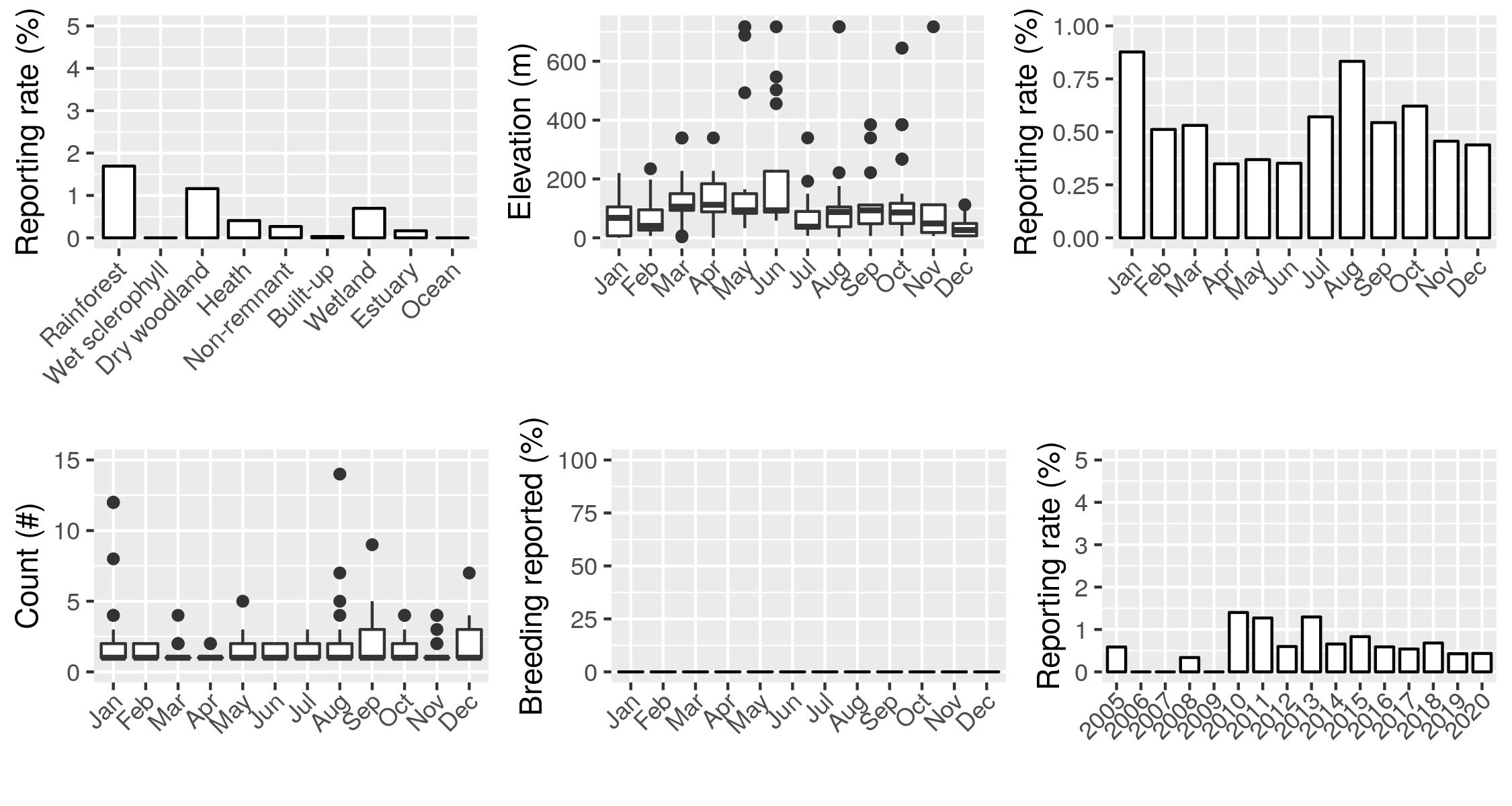 A cute little bird of wooded environs, the Australian Owlet-nightjar is Australia’s smallest species of nocturnal bird and is found across nearly all of the Brisbane region in small numbers. It is likely much more common than the current data suggest, as with most nocturnal species.

Birds have been recorded from all parts of mainland Brisbane, with records as far east as Ransome, as far west as Kholo, and from Tinchi Tamba in the north to the Koala Bushlands in the south. Most records, however, come from remnant, large tracts of bushland, particularly those in the west and north west parts of the LGA. The species has never been reported from Moreton Island, although given the amount of suitable habitat present it is highly likely they are resident there as well; Moreton Island’s poor coverage in eBird currently is probably to blame here. The species has never been recorded as breeding in Brisbane, but given the birds are cryptic breeders and there is no clear seasonal trend in abundance it seems likely that birds do breed within our environs, but to date have been undetected while doing so.

As a species quite dependent on undisturbed habitat, this species is at risk from habitat loss both within Brisbane and across Australia more broadly. Given that most of the key sites for the birds within the Brisbane region are already protected in some way or another, large-scale local population declines seem unlikely, but the species should be monitored to ensure numbers remain stable.

Owlet-nightjars are found across all of mainland Brisbane, but are generally restricted to large tracts of remnant bushland where there are suitable trees for them to roost in during the day and plenty of prey available. There are only a handful of reports from sites without such features available to the birds. They do not exhibit any particular elevational preference, being reported from sea level to over 500m, at a mean altitude of approximately 100m, and no clear seasonal variation therein. Birds have been reported in a number of habitats, but show a clear preference for rainforest and dry woodland. Interestingly, there have been few - if any - records from wet sclerophyll, which typically occurs between the previous two habitats or in similar areas. This may be a simple problem of insufficient data or may be indicative of a habitual trend exhibited by the species.

The distribution of birds across the city shows no clear seasonal trend, with most of the main sites for the birds having records year-round. The species has never been reported from Moreton Island, and is also absent from historical records (Vernon & Martin 1975), a somewhat surprising result given the abundance of dry woodland habitat present. This may be a simple issue of not having enough data (especially nocturnal reports) to detect the species, or once again may be symptomatic of a habitual trend exhbited by the birds.

This species has never been recorded breeding in Brisbane. Across Australia, birds breed from August to December (Higgins 1999), with nests typically built in hollows up to 5m above the ground. Given the inconspicuous nature of these nesting hollows, it is unsurprising that birds have never been reported as breeding, as this would likely require a concerted effort by a diligent observer. However, breeding is likely to occur at all locations where the species is regularly found and where there are suitable nesting hollows.

The reporting rate for Owlet-nightjars in Brisbane has been relatively stable since 2010, with birds being reported on 0.5-1% of all checklists. There were no reports in 2009, perhaps suggesting a degree of annual variation in the abundance of the species, but given the birds are believed to be quite sedentary and territorial across their range (Higgins 1999) this seems unlikely. Average territory size is around 20ha (Doucette 2010), indicating that birds need a large amount of habitat to breed successfully, and if a strong population is to occur there must be significant areas of well-connected habitat for the birds to live in.