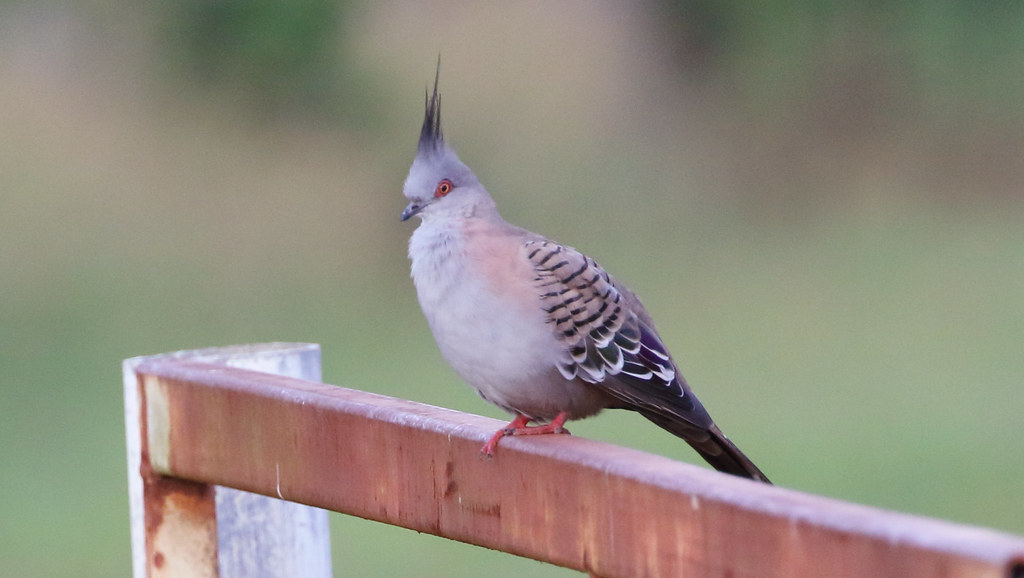 Common but decreasing resident of widespread habitats. Reporting rate varies throughout the year slightly, but birds appear to be mostly sedentary. Not presently of major conservation concern, but decline should be monitored.

One of Australia’s most common species of pigeon, the Crested Pigeon is abundant over much of its range, and indeed remains common throughout the Brisbane region, despite a notable decline over the past decade that merits further investigation. The species is distinctive for its sharply pointed crest and iconic whistling flurry of wingbeats that can be heard when birds are flushed or startled. Birds are moderately gregarious, being most often found in pairs or small groups, although counts of up to 50 are known in the area. 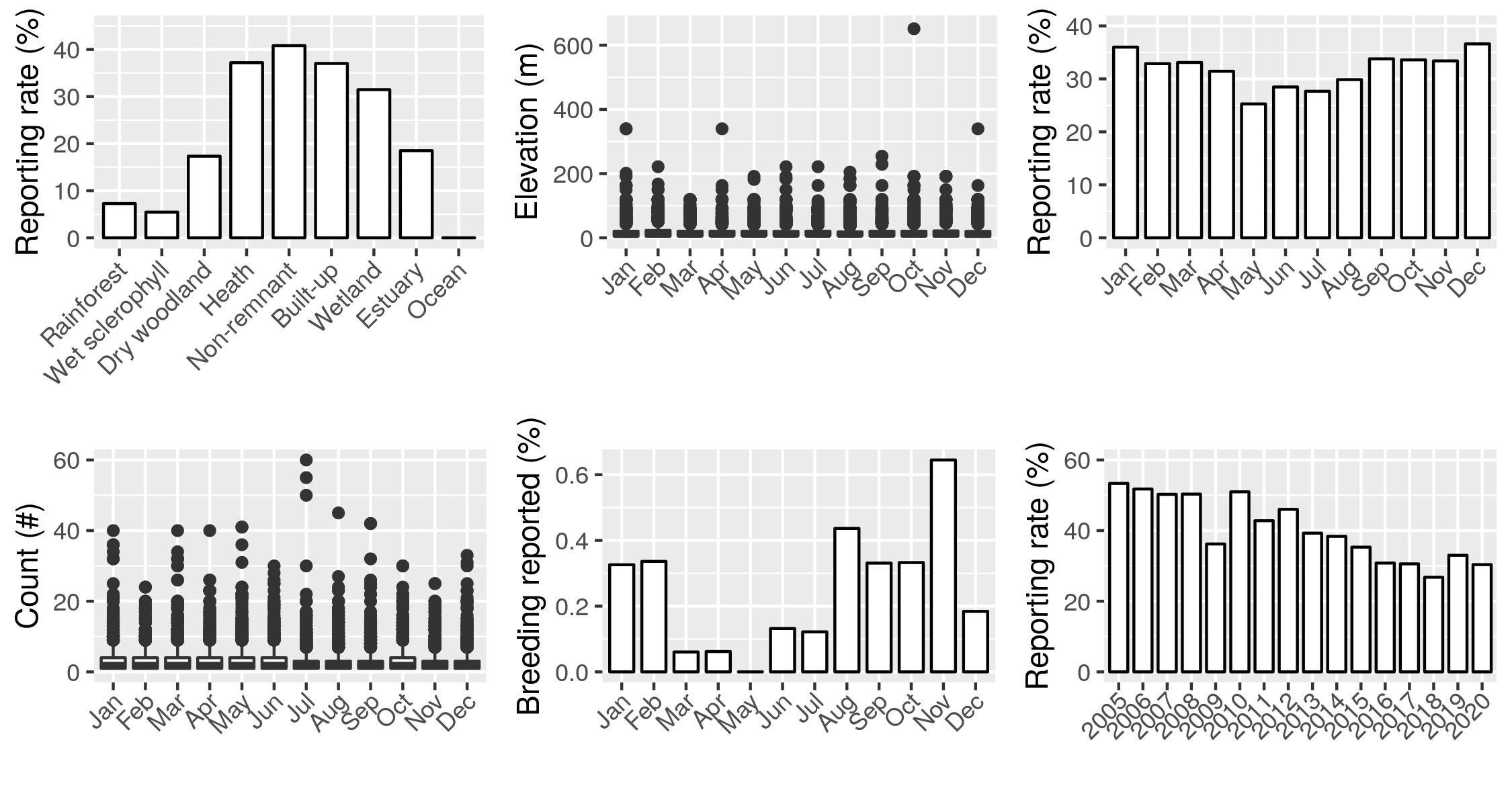 Widely distributed across almost all of Australia excluding Tasmania and the far north, Crested Pigeon are an abundant species of moderate-sized pigeon. The genus Ocyphaps is monotypic, but the species is quite closely related to several other Australian pigeons, including the Rock-Pigeons (Petrophassa) and Bronzewings (Phaps). Sexes are very similar and the species itself is quite straightforward to identify, with a distinctive (particularly within Brisbane) upright crest and iridescent wing panels that vary in colour depending on the lighting.

Crested Pigeons are somewhat gregarious, but are most commonly found in pairs or small family groups. Given their abundance however, it is not uncommon to find several pairs in a relatively small area across the one birding outing, and flocks of numerous birds do occasionally form; as such, counts of up to 50 birds have been recorded locally (Tzu-Chiang 2016). Within Brisbane, birds are found almost exclusively at lower elevations up to 200m, with roughly uniform abundance over a vast tract of the city where habitat is suitable. Birds breed in Brisbane, with numerous breeding records between August and February. Birds are present in Brisbane year-round, although monthly abundances vary somewhat.

Interestingly, this species appears to be facing a significant decline across the city currently, and the causes of this are unclear. More work is needed here, and the species’ abundance should be closely monitored, not only within Brisbane but across Australia more widely.

Crested Pigeons are common across a large area of the city, having been reported from most Atlas squares with substantial data coverage. They appear to be essentially absent from the heavily-forested western parts of the city, particularly those above 200m in elevation, above which height the species has only been reported once. The hard altitudinal cap is notable, and it would be interesting to investigate this further, particularly if habitat mapping were to be incorporated.

Habitat-wise, birds are found in most open habitats across the city, and are most common in non-remnant, built-up and wetland habitats. It is interesting then, given this displayed preference, that the species appears to be facing a decline locally, considering the species seems well-adapted to life in urban areas. Clearly, more investigation is needed. Birds are yet to be reported on Moreton Island, although it seems likely that they would occur occasionally there, and on the other smaller bay islets (the species has been recorded on St Helena).

The geographic distribution of Crested Pigeons across the year shows some variation, with seemingly more sites occupied over spring and summer than autumn and winter, although the exact reasons for this are unclear. This could be a result of birds forming flocks during the non-breeding season and aggregating together at favourable sites while food is scarcer, before separating into pairs to breed, or it could be something else entirely.

Crested Pigeons are resident breeders in Brisbane city, with numerous breeding reports from throughout the warmer months of the year between August and February. The main peak seems to be in late spring, although records from October are scarce, perhaps suggesting birds mate and are showy throughout August-September, before settling down to nest in October before young hatch in November - detailed analyses of breeding records and some dedicated observations would assist in confirming this.

The reporting rate for this species does not vary greatly over the year, suggesting that birds are mostly sedentary, although there is some fluctuation, with more records over spring and summer than autumn and winter, as noted above as well. It would be good to determine the underlying factors that lead to such variation.

Crested Pigeons are noteworthy for displaying a clear and marked decline in reporting rate over the past decade and a half in Brisbane. The causes for such a decline are unclear but should be investigated. It is unknown at this stage how long the decline has been occurring (and as such, it would be good to analyse pre-eBird data and other sources to corroborate such findings), or to what extent it is affecting other areas of the country as well.