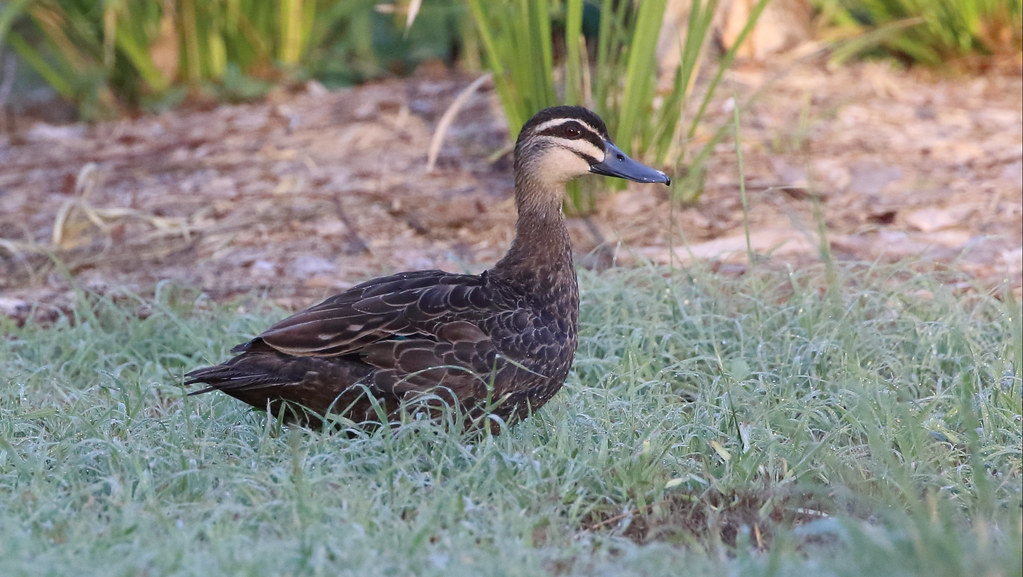 Abundant breeding resident in freshwater habitats. Records all throughout the year with no clear pattern, although some variation in abundance across the previous decade. Not of conservation concern, although some minor threats to the population both in Brisbane and across range. Photo by Richard Fuller, Mookin-Bah Reserve, 7 Feb 2018.

The Pacific Black Duck is one of Australia’s most common duck species and can be found all across the country. A plain, brown duck, identification is straightforward, with the only confusion species being female domesticated Mallards and intergrades between the two species. Birds are gregarious, and the average count in Brisbane is around a dozen, but counts of over 150 have been recorded. Birds may occur anywhere there is water. 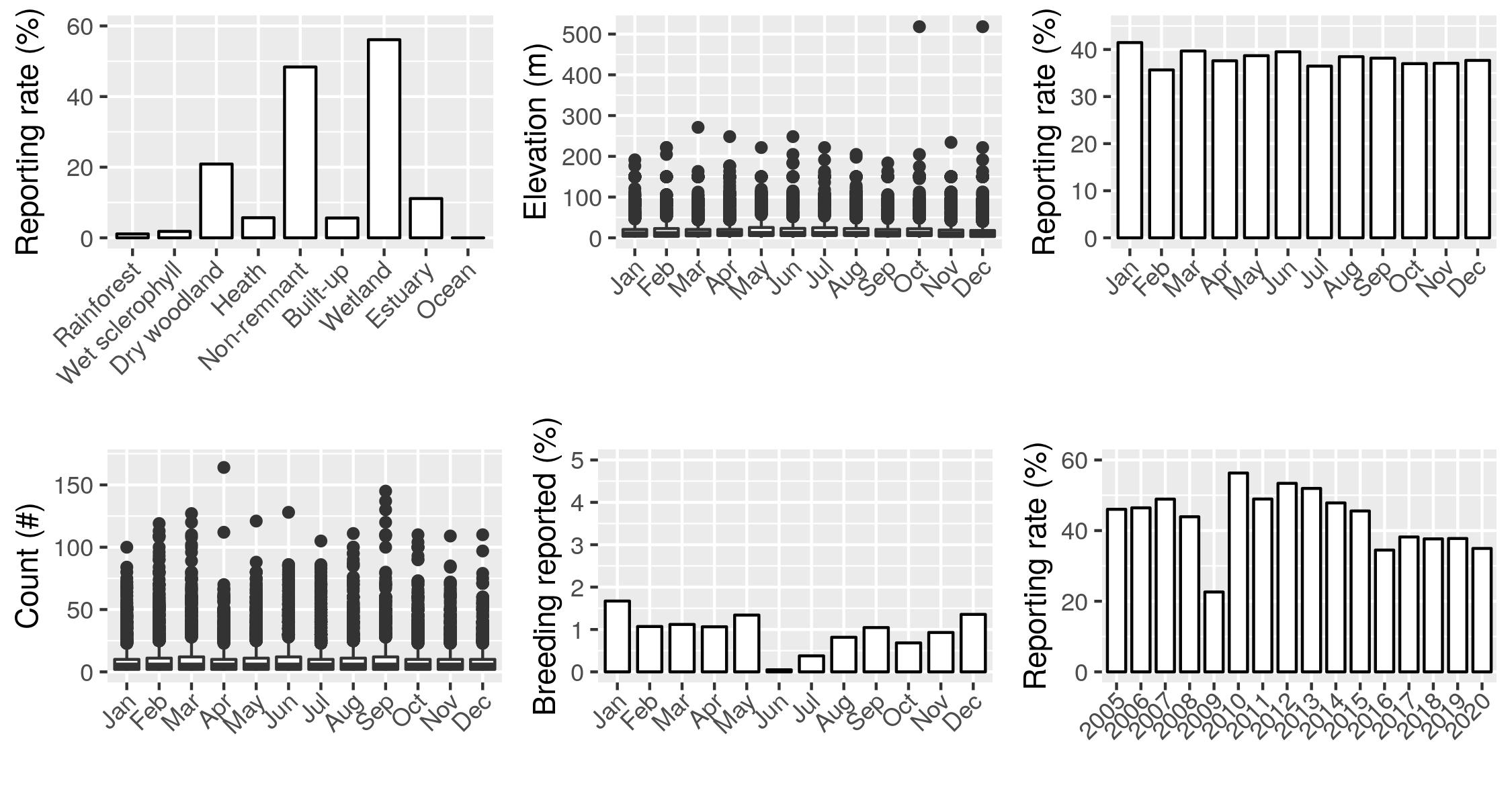 The common duck species in Brisbane parks and gardens, Pacific Black Ducks are well-known by both birders and non-birders alike. Abundant across the majority of their range in Australia, they can survive in limited tracts of wetland habitat and as such are less vulnerable to the threats that many of the other species in the Anseriformes face.

Pacific Black Ducks have been reported in the vast majority of populated Atlas squares within Brisbane, with the exceptions being Moreton Island (where there are only a handful of records) and the heavily forested areas of the Camel’s Head in the north west of the city. High counts of over 100 are not terribly uncommon, with the highest count being 164 at Kedron Brook Wetlands in the north east (Wells 2009).

Birds are present in Brisbane year-round, and do not appear to exhibit much nomadic or migratory movement, with no clear seasonal trend to their abundance or elevation. Breeding has been reported in all months of the year, with a peak across the summer months. As a species that can use both well-preserved wetland habitats but also adapt to less suitable habitats such as muddy creeks, culvets and sewerage ponds, this species is not at great threat within the Brisbane region.

Pacific Black Ducks are found all across the city (barring the dry heathland of Moreton Island and the mountainous forests of the Camel’s Head) and are abundant in many locations. They favour wetland habitats, where they are reported on nearly 60% of checklists, but can also be found commonly in non-remnant areas, and less commonly in estuaries, heath and woodlands. They exhibit a definite elevational preference, being most commonly found near sea level, although birds have been recorded at elevations over 200m. Within Brisbane, the species appears to be mostly sedentary, although birds may move short distances to feed. There is no clear trend to movements in and out of the region or along elevational gradients.

There are over 100 reports of Pacific Black Duck breeding activity, with records in all months except July. There is a significant peak in breeding over summer, with nearly 1.5% of checklists reporting breeding in January. Given the species’ conspicuous nature across the city it is not surprising that there is plenty of breeding data available. Breeding has been reported at 28 sites within Brisbane, with the most reports coming from Oxley Creek Common (15 reports), Dowse Lagoon (13 reports) and Kedron Brook Wetlands (11 reports). While there is an acceptable amount of breeding data for this species, it would be good to identify further breeding locations and events to determine the true breeding period of the birds.

Reporting rate for Pacific Black Ducks has remained quite stable across the Atlas period, sitting between 30% and 50% of checklists in most years. Notably, 2009 was a poor year for the birds in Brisbane, with only just over 20% of checklists reporting any birds. It is unclear why this is. The species is not of any conservation concern in Australia as birds are widespread across the country and their population is stable. Key threats include hunting (in southern states), cross-breeding with introduced Mallards diluting the gene pool (Guay et al. 2009) (as has happened in New Zealand (Gillespie 1985)) and destruction of their preferred wetland habitats. The latter is the most significant threat within the Brisbane region, but given their willingness to adapt to poorer environments, Pacific Black Ducks are likely to remain common across Brisbane even with habitat loss.