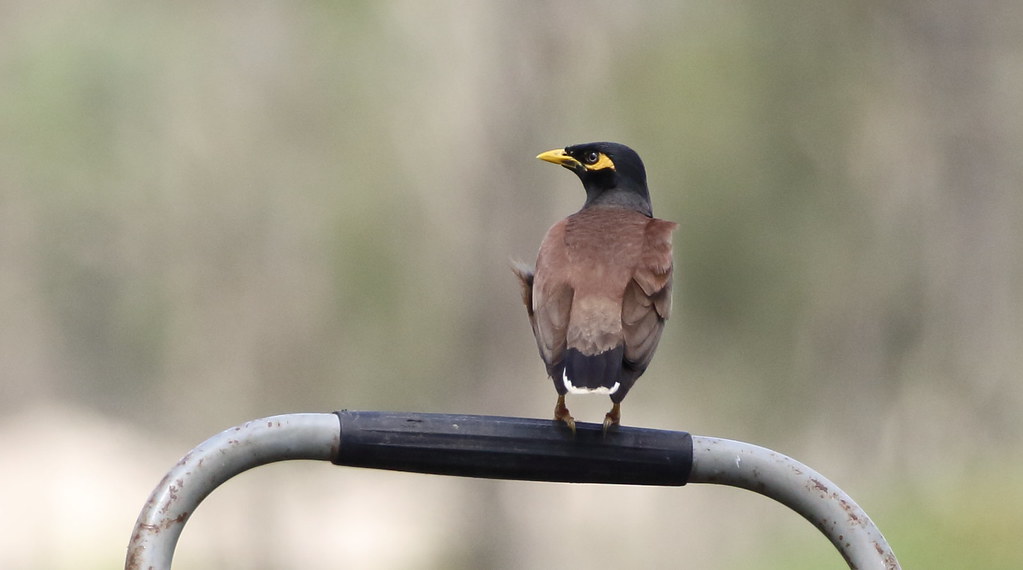 Widespread introduced pest species that may be declining locally despite rapid expansion nationwide. Appears to exhibit some seasonal variance within Brisbane, being twice as abundant over summer, but no clear reason for this pattern. Not of conservation concern owing to pest status.

The Common Myna is an introduced species of Starling, native to south east Asia and the Indian Subcontinent. It is unmistakeable within the Brisbane region, with brown and black plumage and a striking yellow beak and bare eye skin. Mynas are common around the built-up areas of the city, being less common in areas with remnant habitat. Recent data suggest this species is declining in Brisbane, but the reasons for this are unclear. 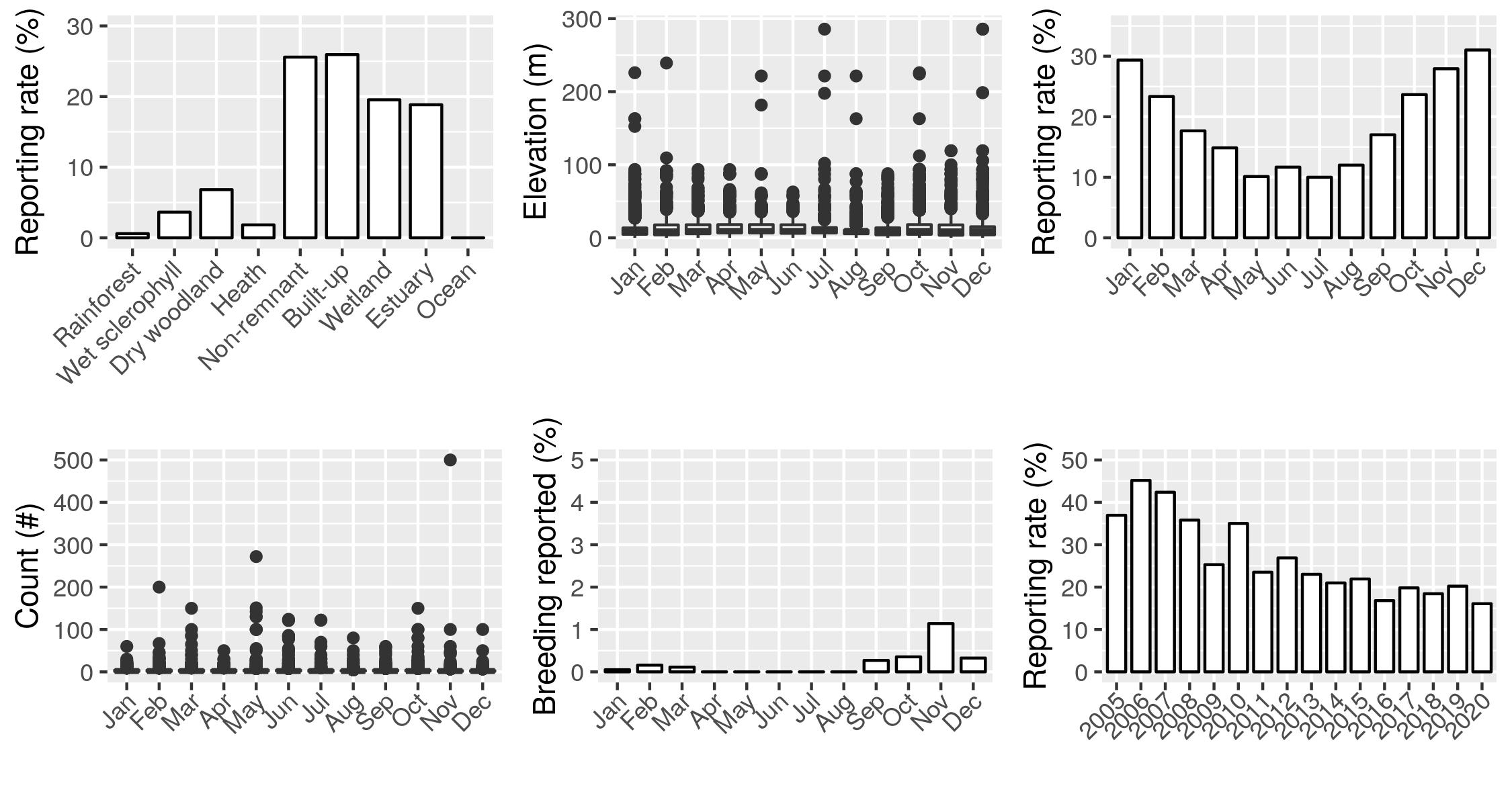 A colonial species of open habitats around Brisbane, Common Mynas are an introduced pest species that are widely distributed across the region. Interestingly, although the species can be regularly found in large flocks, birds appear to be declining in abundance quite rapidly, with a 50% decrease in reporting rate over the last decade. Mynas are found in nearly any open areas of the city, especially in non-remnant, built-up, wetland and estuarine habitats.

Although the species is often found in large flocks of over 50 birds, the average count is much lower, sitting around 3.5 birds per checklist. The high count is 500 birds at Stones Corner (Yong 2013), with several counts of 150 birds also recorded. Birds are present in Brisbane all-year round, but display quite a significant level of seasonal variation in abundance, with an increase in reporting rate from 15% in winter to 30% over summer.

Common Mynas are found all across the suburban fabric of Brisbane, with records from nearly every surveyed grid square. They appear to be absent from Moreton Island (where birds have never been recorded) and much of the forested area of the Camel’s Head and south west section of the LGA. In Brisbane they are mostly a lowland species, although records up to 150m in altitude are not uncommon and there have been reports as high as 400m. There is no clear seasonal variation in their elevation, although beyond the Brisbane region birds are reported to display some local altitudinal movements.

Mynas have been reported from most habitats in Brisbane, but are by far most abundant in open spaces, specifically in non-remnant, built-up, wetland and estuarine habitats, where they are recorded on over 20% of checklists. Birds are occasionally reported in wet sclerophyll and dry woodlands (5%), and there are a handful of records from rainforest. The species has never been recorded in heath (which is almost exclusively found on Moreton Island) or the ocean. The distribution of Common Mynas in Brisbane shows no clear seasonal variation, with birds being present at roughly the same locations year-round, except that they are significantly less abundant in winter than in summer. Birds have been found to move between different habitats across the seasons (Higgins et al. 2006; Pell & Tidemann 1997), so this may be what is happening in Brisbane, but more work is needed to confirm this.

Common Mynas present an interesting question with regard to their seasonality. Within most literature, both from their native and introduced range, birds are reported as being mostly sedentary, and yet Brisbane’s birds exhibit a clear seasonal trend, indicating local or perhaps long-distance migration with seasonal changes. Birds are far more common in summer than in winter. Some work beyond the Brisbane area has found that birds move between suburban and bushland environs across the year (Higgins et al. 2006), and this may be the case in Brisbane, but more work is needed to determine this. Interestingly, the average count per checklist increases slightly over winter, indicating that birds are flocking together in larger numbers during the colder months, which may indirectly lead to decreased overall reporting rate without a decline in net abundance, but once again more work is needed.

Birds have been reported breeding 20 times in Brisbane, from different parts of the city and at different times of the year, but all in the warmer months of the year, which is in line with their known breeding season across the rest of Australia (Higgins et al. 2006). Given the increase in records over summer, it is perhaps likely that birds move into the Brisbane region to breed over summer then disperse more widely over the cooler months of the year, but this is unclear at the moment and would benefit from further investigation.

Reporting rate for Common Mynas has drastically decreased over the past decade, with birds being reported on just 20% of complete checklists in 2017 compared to 40% in 2005-2006. This may be associated with a dedicated culling program sponsored by Brisbane City Council, but it also may be a result of other variables that are as yet unclear. Given the pest status of this species and their incredible ability to dominate any environment, such a decline is welcome in the city and hopefully will be associated with a rebound in the biodiversity seen amongst our native birdlife.

Given the species is an introduced pest, the birds are not of any conservation concern themselves, although the do pose significant conservation risks to many other species. The population must continue to be monitored for further declines and the reasons for such changes in abundance determined.