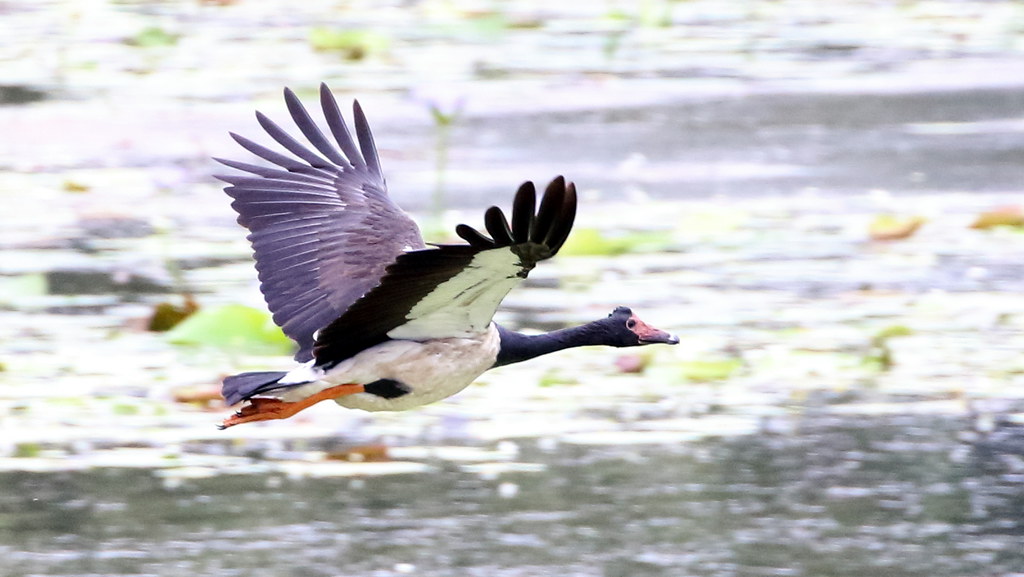 Widespread but patchy breeding resident and perhaps partial immigrant in freshwater swamps. More records in summer, but occurrence fluctuates and not known if regular migratory movement occurs. Not of conservation concern, but dependent on wetlands, which are vulnerable to habitat change. Photo by Richard Fuller, Dowse Lagoon, 2 Jan 2018.

The Magpie Goose is a large, distinctive waterbird with striking black and white plumage and yellowish legs. A gregarious species, counts of up to 400 have been recorded in Brisbane. The Magpie Goose is locally common but patchily distributed across Brisbane, mostly at a handful of regular sites, although given its propensity for wandering (Frith & Davies 1961), it can occur anywhere with suitable habitat or as a flyover. 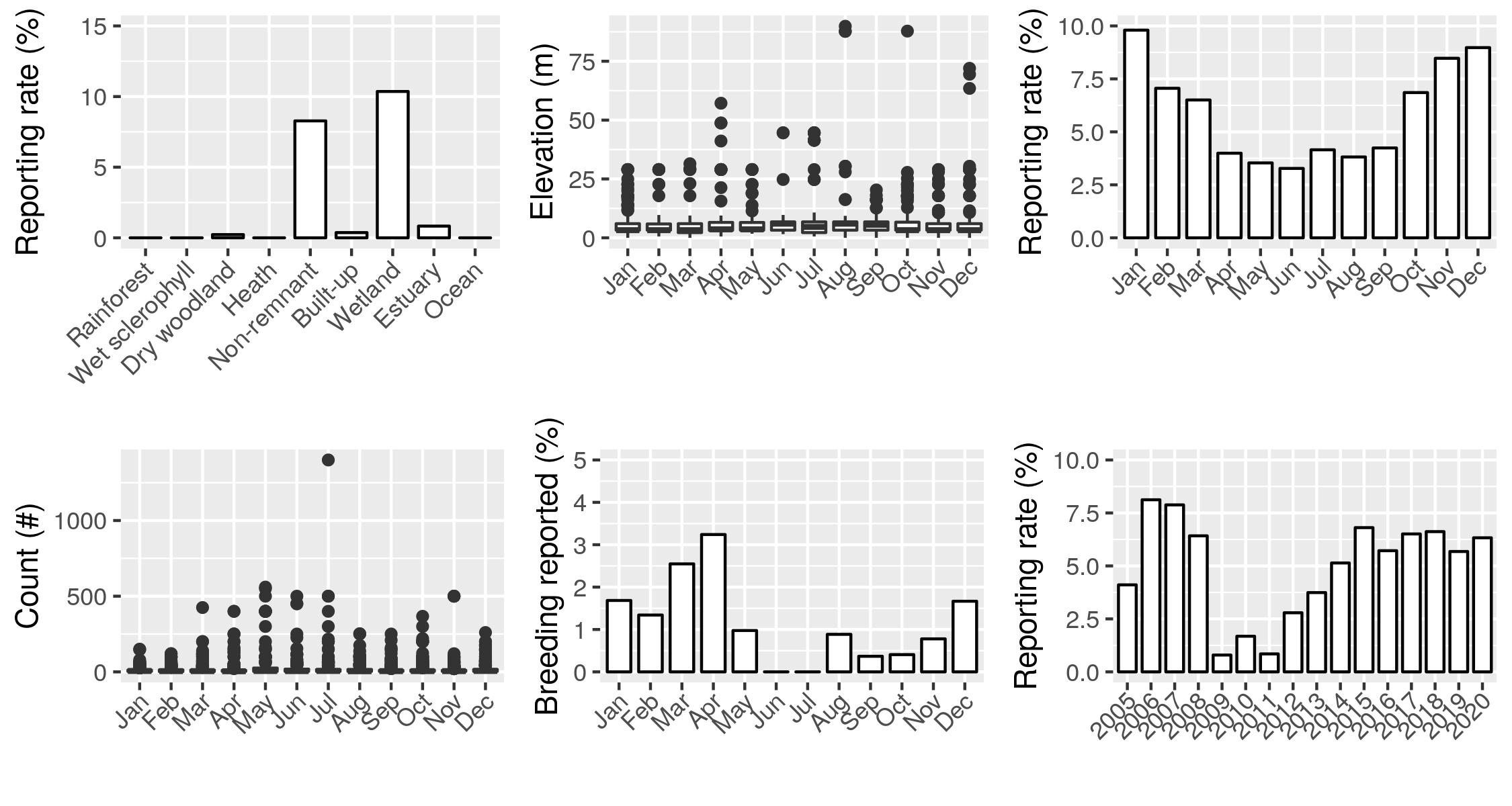 A colonial species of wetland habitats, the Magpie Goose can reach high abundance, and has a broad distribution across northern, eastern and southeastern Australia, yet it has become scarce in many southern districts with the draining of wetland habitats on which it depends, (Nye et al. 2007) with further population declines likely (Traill et al. 2010).

The Magpie Goose is widely distributed across lowland regions of Brisbane, but it occurs patchily, favouring well-vegetated freshwater swamps. Although never occurring in big numbers in Brisbane, breeding has been reported from several locations, and counts over 100 birds have been reported from Kianawah Road Wetland, Metroplex Wetlands, Murarrie Swamp and Ox Bow Lake, and Sandy Camp Road Wetlands. The largest counts are both of 400 birds at Metroplex Wetlands on 20 Jul 2015 (Alexander 2015) and Sandy Camp Road Wetlands on 28 Apr 2017 (Attewell 2017). Magpie Geese are present in Brisbane year-round, although there is a clear peak in reporting rate in Oct-Jan, prior to the main onset of breeding activity in Jan-Apr.

As a species dependent on wetland habitats (Frith & Davies 1961), which are under pressure from modification and loss, care is needed to maintain high quality wetlands fringed with emergent vegetation preferred by Magpie Geese (Corbett et al. 1996). Of particular importance are the major sites in which this species is concentrated (Kianawah Road Wetland, Metroplex Wetlands, Murarrie Swamp and Ox Bow Lake, and Sandy Camp Road Wetlands).

Magpie Geese are found across Brisbane, except the higher altitude forested western districts between D’Aguilar National Park and Lake Manchester to Wacol, and Moreton Island (where the species has never been recorded). It is a lowland species in Brisbane, occurring at mean elevation of 11.5 m, with no clear seasonal variation in the elevation of records. Magpie Geese have been recorded from many different habitats as flyovers or occasional visitors, but the reporting rate only reaches substantial levels in wetland habitats. Even in wetlands, the reporting rate only reaches about 20%, so it is not a commonly encountered species in Brisbane. Their geographic distribution across Brisbane is presumably mostly driven by the low availability of well-vegetated freshwater swamps in the western region of the city, although it is perhaps a little surprising that some of the well-watched sites such as Priors Pocket, Gold Creek Reservoir and Lake Manchester haven’t turned up more records over the years, especially since the species is common much further west beyond Brisbane’s border in parts of the Lockyer Valley, and the species used to be fairly common on the city’s western reservoirs (Jack 1963, 1957).

The distribution of Magpie Goose shows no clear seasonal variation, with approximately the same areas occupied throughout the year, although there is perhaps some evidence of birds being present at more sites in summer, when breeding occurs. Since this is a colonial species, this seemingly paradoxical result might be explained by wandering juvenile or supernumerary birds from breeding colonies. Evidence of breeding has been recorded from 8 atlas squares, with up to 200 birds present during a breeding event at Metroplex Wetlands (Sue Lee & Catherine Hirsch 2017).

There are 21 reports of Magpie Goose breeding activity, spanning Jan-Apr, although nests with young are known only from Jan and Feb, suggesting a mid-summer peak to breeding activity. The main peak in reporting rate occurs prior to this, in Oct-Jan, when the species is reported from 8-10% of all checklists in Brisbane. This perhaps suggests that birds are moving into the Brisbane area to breed, wandering and being recorded at a number of locations before concentrating into their breeding colonies. Breeding is only so far reported from three locations (Metroplex Wetlands, Sandy Camp Road Wetlands and Sherwood Arboretum; only the first two sites have significant numbers of breeding pairs. It would be good to collect more breeding data for this species so the full timing and geographical extent of breeding activity is understood.

Reporting rate for Magpie Goose has remained relatively stable between 2005 and 2017, perhaps increasingly slightly over the period. Notably, there was a clear drop in reporting rate in 2010 and 2011, both very wet years in Australia’s interior (Meteorology 2012), suggesting some connectivity between Brisbane and inland breeding colonies. The species is not of any significant conservation concern in the sense that Brisbane’s population is rather peripheral to the main distribution of the species in Australia, and appears to be fairly stable over time. However, significant decreases in the southern populations as a result of land clearing, habitat destabilisation and other threats do pose a risk to this species, and similar losses of populations could occur in Brisbane if not monitored.