Moderately common resident of wetlands and estuaries across Brisbane. Perhaps slightly more abundant in summer, but unlikely that regular migratory movement occurs. Not of conservation concern, and no clear trend to abundance.

A common species of duck across much of southern Australia, Chestnut Teal are sexually dimorphic, with breeding males being brightly plumaged but females and juveniles having much duller plumage which is often difficult to distinguish from that of the Grey Teal. Teal are gregarious, with counts of up to 800 birds reported, and are best described as widespread and common within Brisbane, although their distribution is usually limited to wetlands and estuaries. 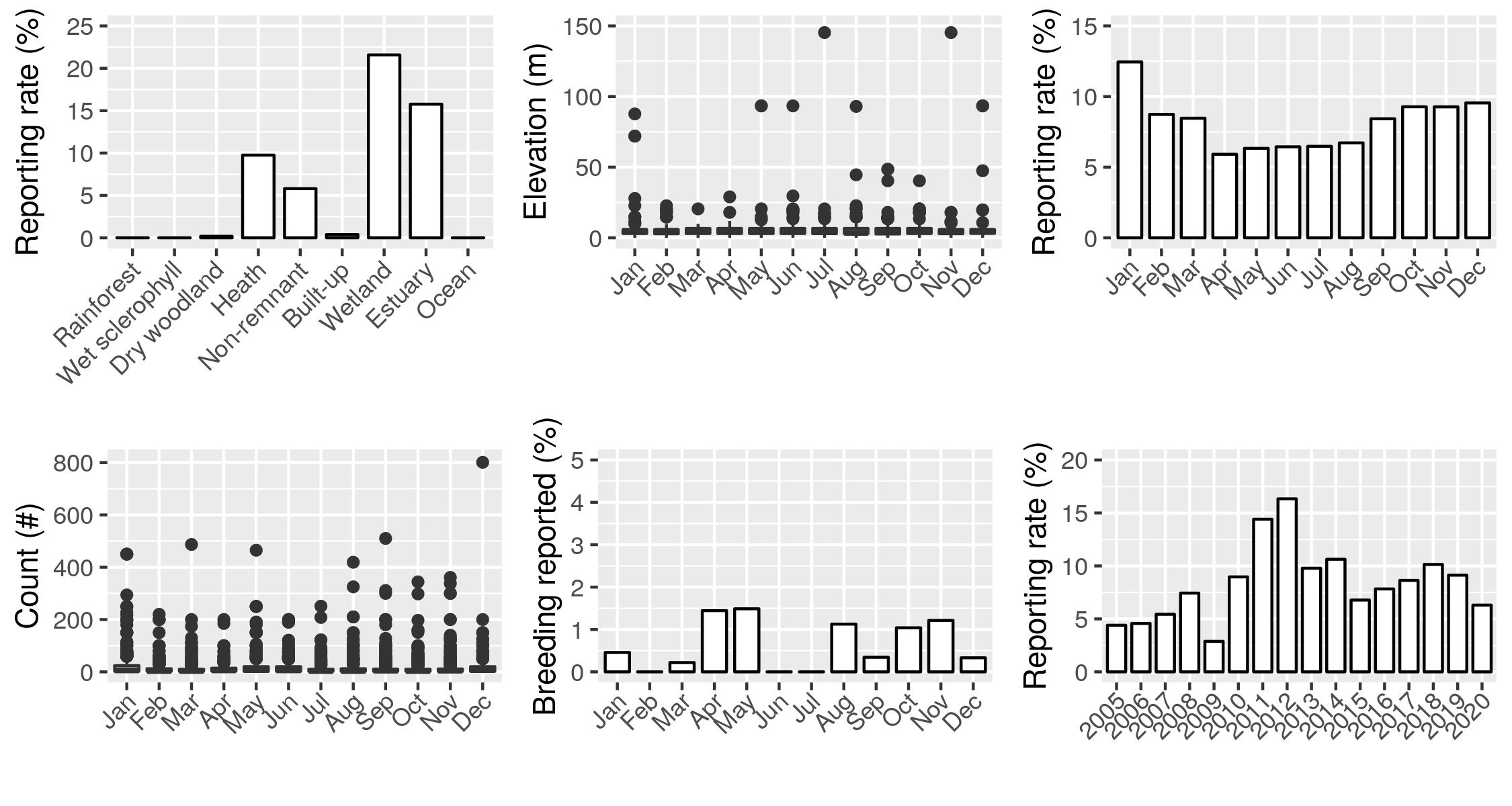 An abundant species across south eastern and western Australia, Chestnut Teal are a common bird found across a variety of wetland and eastuarine habitats within Brisbane. Females and juveniles are very difficult to distinguish at times from the near-identical Grey Teal, and mixed flocks between the two can occur. Chestnut Teals are best identified by being a richer rufous-chestnut colour overall, with a darker coloured neck and face than Grey Teal; these features are not always definitive (Marchant & Higgins 1990; Menkhorst et al. 2017). Care should be taken when reporting either of these two species, and it must be noted that not all birds within a flock may be identifiable to species level; hybrids between this species and other ducks are rare, but not unheard of, and can further complicate matters (McCarthy 2006).

Chestnut Teal are gregarious within Brisbane, and may be found in very large flocks at times, with a high count of 801 birds in a flock at Kedron Brook Wetlands in 2012 (Wells 2012). The species is widely distributed across the lowland regions of Brisbane up to an elevation of approximately 150m, although counts of over 350 birds are only known from Kedron Brook Wetlands. Birds breed in Brisbane, although there are few records, and breeding has been reported widely from 8 different locations around the city; most breeding records are of recently fledged young. The species is present in Brisbane all year-round, although there is a slight increase in the reporting rate over summer, perhaps associated with birds moving into the region to breed, or a result of dispersing juveniles.

Although this species appears somewhat dependent on wetland and estuarine environments, which are quite threatened by modification and destruction, birds appear to be quite well-adapted to artificial habitats and moderately well-suited to suburban living. As a result, this species’ current status within Brisbane appears to be stable. Nonetheless, care is needed to maintain high quality wetlands and estuaries, natural or artificial, that are suitable for waterfowl and this species in particular. Of special importance are the sites this species is most common at, particularly Kedron Brook Wetlands.

Chestnut Teal are found widely across Brisbane, although are by far most common along the coastline, typically being restricted to wetlands and estuaries from Tinchi Tamba in the north to Mookin-Bah in the south. Birds appear to be more or less absent from the western suburbs, with the exception of occasional records in Moggill and Oxley; there are no records from the north west forests of the Camel’s Head or from Kholo and Lake Manchester. Birds also appear to be mostly absent from the densely-packed suburbs both north and south of the city, likely due to a lack of suitable habitat. They are probably most well-described as uncommon or rare on Moreton Island, with only a handful of records, although given the paucity of data available for that part of our city currently, this remains to be confirmed.

This species is best-described as a lowland species within Brisbane, with the vast majority of records coming from elevations below 10m, and a maximum altitude of less than 150m. Their altitudinal distribution is presumably driven by the availability of suitable estuaries and wetlands, which are more or less absent in the elevated parts of the city, and most common near the coast. Birds have been reported from several habitats, but are most common in wetland and estuarine environments, where the reporting rate is approximately 15-25%. The geographic distribution of Teal across Brisbane is presumably mostly driven by the availability of such habitats.

The distribution of birds within the city shows no clear seasonal variation, with approximately the same areas occupied throughout the year. Unlike their close relatives in Grey Teal, Chestnut Teal are not particularly nomadic and appear to inhabit the same regions all year-round. It is however possible that birds wander somewhat across the city in search of optimal habitat, although more fine-scale monitoring than is currently available is needed to confirm this hypothesis.

Chestnut Teal are present in Brisbane all year-round, although as noted above they are slightly more common over summer than winter. During the warmer months, birds are reported on as many as 12% of all checklists, while over winter and the transition months the reporting rate is much lower; in June it is as low as 6%. The specific reasons for this are somewhat unclear (Marchant & Higgins 1990), and the species’ movements and distribution are not overly well-studied (Norman & Brown 1988). It seems likely however, that this species moves toward the coast to breed over summer (resulting in increased abundance within Brisbane), and then disperses either locally or more widely over the non-breeding season. Some detailed investigation into Brisbane’s teal and their movements would be useful in assessing this hypothesis.

There are several reports of Chestnut Teal breeding within Brisbane, from a wide variety of sites across coastal and inland Brisbane, indicating that this species breeds somewhat regularly within the city. Breeding has been reported from 8 locations, and most records are of recently fledged young, with one each of occupied nests, feeding young and nests with young. It would be good to collect more breeding information about this species within Brisbane, and conduct some specific surveys for this species over spring and summer to determine where birds breed, and if climactic conditions beyond our region affect the abundance of breeding birds.

The reporting rate for Chestnut Teal has been somewhat variable over the Atlas period, with birds being reported on as many as 17% of checklists in 2012 but just 3% in 2009. The exact nature of the factors affecting Chestnut Teal abundance in Brisbane is currently unknown, but likely factors include climactic conditions within Brisbane and outside our region. Chestnut Teal are not of any significant conservation concern in the sense that Brisbane’s population is rather peripheral to the main distribution of the species across southern Australia, and the overall population appears to be fairly stable over time. However, the species is somewhat threatened by hunting (in Victoria) and destruction of habitat across its range, and care is needed to preserve the habitat of this species within Brisbane to safeguard against any declines in population.