Widespread breeding resident across varied habitats. Perhaps more common during breeding period in spring but no clear long-term trends apparent. Not of conservation concern but faces similar threats to most other raptors in the region.

The Brown Goshawk is a medium-sized Accipiter hawk with ruddy red-grey plumage and a powerful build. Within Brisbane, Goshawks are typically found alone, although there are several records of multiple birds, with counts up to 4 being not unheard of. Birds can be found all over Brisbane, including on Moreton Island and the north west forests (where Collared Sparrowhawks appear to be mostly absent), but are not common in any given location. 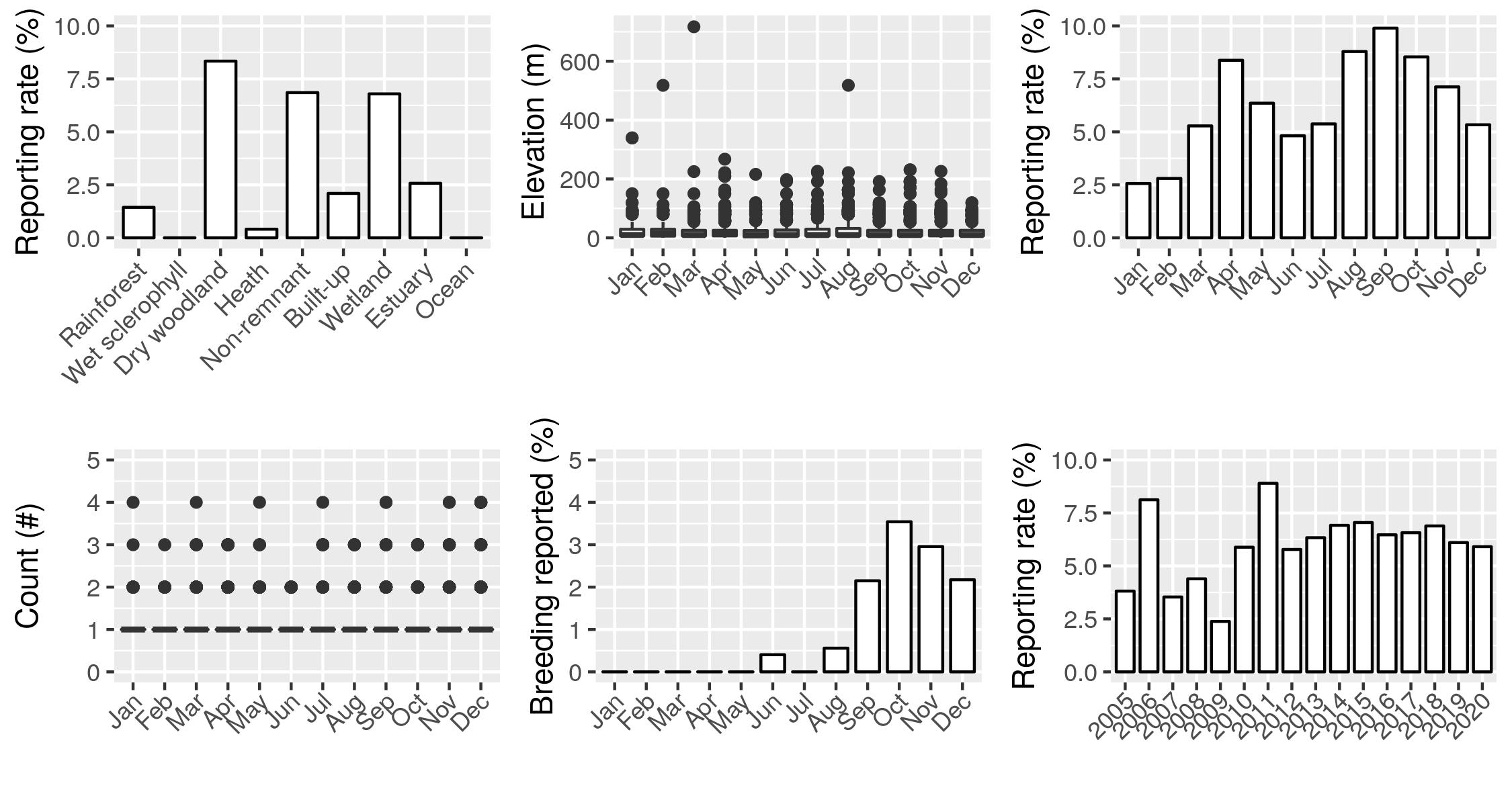 The most common Accipiter species within Brisbane, Brown Goshawks can be found in nearly any habitat provided there is suitable prey available to them. However, they never reach particularly high abundances in any given site, although there are a few areas where they can be found relatively regularly. Additionally, birds may hang around at a given site as long as there is suitable prey available for them to feed on. Similar in appearance to their relative the Collared Sparrowhawk, Brown Goshawks differ in identification in having a rounded tail, thickset legs and a short middle toe. Good views are often needed to separate the two species, and care should be taken when viewing Accipiters to prevent misidentification.

Birds are present in Brisbane all-year round with no abundantly clear trend to their frequency, although they most are most often found in the spring with a secondary peak in autumn (see graphs), perhaps indicating an element of migratory behaviour. Much more work is needed to determine this properly. The species has been recorded breeding in Brisbane several times, all in the months between August and December, but never at high frequencies.

Brown Goshawks are found all across Brisbane in nearly every habitat, with the exception of heathland (which is poorly surveyed, so the species may occur here too) and oceanic regions. Birds have been recorded from every corner of the LGA, from Lake Manchester in the west to the Port of Brisbane in the east, including in the elevated forests of the Camel’s Head. Birds have been several times on Moreton Island, although they do not appear to be common there. In Brisbane they are mostly a lowland species, occuring close to sea level, although birds have been recorded over 400m in elevation at Mount Glorious and Mount Nebo. The species does not appear to move around with climatic or seasonal changes; more likely birds move around the city in response to local prey abundances. Birds are most often found in dry woodland and non-remnant habitats, with secondary preferences for wetlands, wet sclerophyll and estuaries. They are only rarely found in rainforests or heavily built-up areas, although this is not unheard of.

Sites where this species is regularly recorded include, Lake Manchester, Shelley Road, Sandy Camp Road, Kedron Brook Wetlands and Banks Street Reserve, amongst many others. It is however not unusual for birds to be absent from any given site for extended periods of time before turning up again.

There are nearly 40 reports of Brown Goshawks breeding in Brisbane, all from the months between August and December, indicating that this species is a spring breeder within Brisbane, which is in line with its reported season across the rest of its range (Marchant & Higgins 1993). Birds have been reported breeding from 12 sites, with the most reports coming from Dutton Park Cemetery and Tinchi Tamba Wetlands. Unlike Collared Sparrowhawks, these birds do not appear to be particularly cryptic when breeding, as evidenced by their willingness to nest even in well built-up areas such as Dutton Park. It would be good to locate more breeding sites for this species, and to determine whether birds come back to the same locations each year to breed or whether they move around.

The reporting rate for Brown Goshawks over the Atlas period has remained quite stable, with most years having birds reported on approximately 6% of checklists. Interestingly, 2005, 2007 and 2009 were poor years for the birds, with the frequency being less than half of the usual rate, while 2011 was a strong year, with birds being reported on over 8% of checklists. It would be good to determine the causes for these variations, although it is possible there is just natural variation in the birds’ abundance within Brisbane. This species is not of any conservation concern in the sense that it is not threatened across its range, nor does its abundance appear to be decreasing within Brisbane, although there is some threat posed by clearing of habitat across much of south east Australia, and the species has likely been affected by the same in Brisbane.