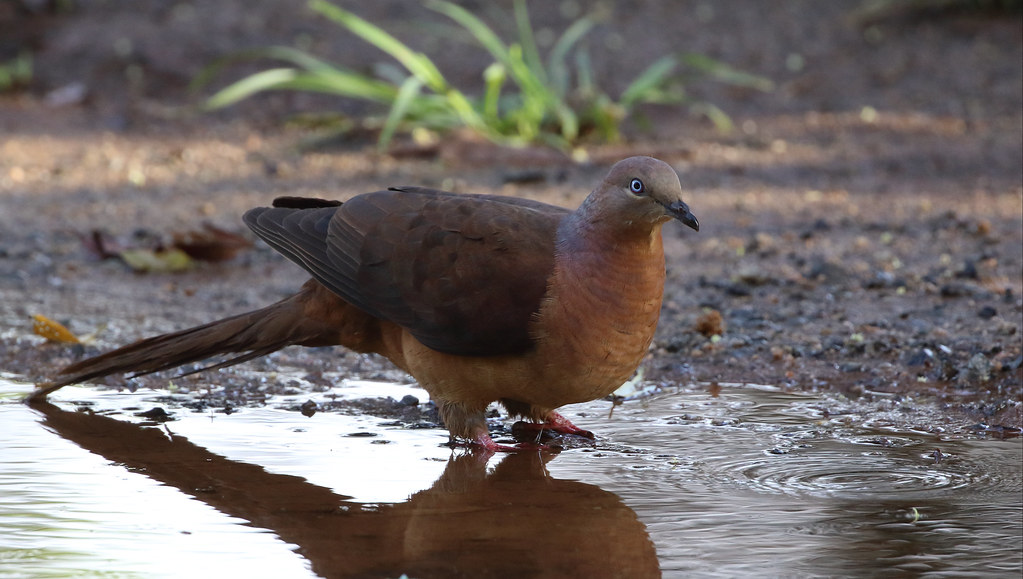 Localised resident of wet forests mostly in the west of the city. Population may be increasing, currently trend is inconclusive. Not of conservation concern.

The Brown Cuckoo-Dove is a large, chocolate-brown species of pigeon native to the wetter forests of eastern Australia. Birds are relatively gregarious, with counts of up to 20 recorded in Brisbane. The Cuckoo-Dove is locally common but patchily distributed across Brisbane, mostly at a number of regular sites, although given birds may wander widely they could occur anywhere with suitable habitat or as a flyover. 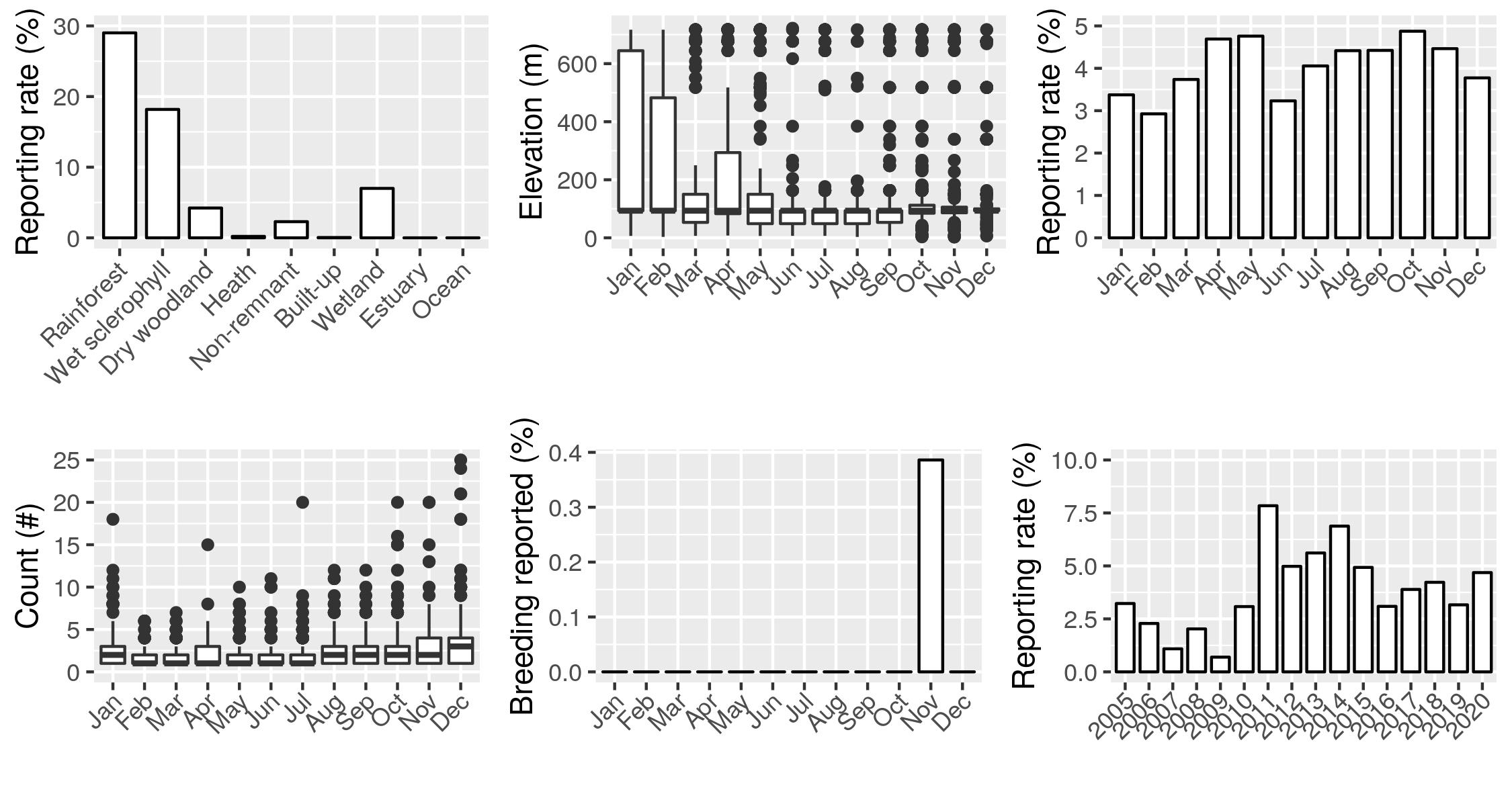 A common species of rainforest and wet sclerophyll habitats along the east coast of Australia from Cape York to Victoria, the Brown Cuckoo-Dove is relatively localised within Brisbane, but is common in the right habitat across the western forests of the city. They are a distinctive species, being the only predominately-brown pigeon in the Brisbane region, and their long-carrying advertising call is also easily identified.

Birds never occur in massive numbers in Brisbane, being typically found singly or in pairs, although several counts of 20 birds have been reported (Gilfedder 2017b; Murray 2014b). Nearly all counts of more than a dozen birds have come from Gold Creek Reservoir, a key location for this species locally. Breeding has never been reported in Brisbane, although given birds are present year-round in the region with very little, if any, seasonal variation in abundance, this is likely due to underreporting of breeding behaviour rather than birds not breeding in the city.

Birds appear to be increasing slightly in abundance, although the current trend is somewhat ambiguous, so more detailed monitoring is needed to confirm this. As a species essentially restricted to large contiguous stretches of wet sclerophyll and rainforest, which are moderately threatened by logging and modification, this species (along with others) should be monitored for any declines and its habitat in the west of the city protected.

Brown Cuckoo-Doves are relatively widespread in the right habitat in Brisbane, tending to favour rainforest and wet sclerophyll, with very few records outside these environments, although within them the reporting rate is quite high, around 25%. Furthermore, the majority of this species’ suitable habitat in Brisbane lies in the Camel’s Head, which is poorly birded, so it is highly likely that birds are much more widely distributed within the city than current data suggest. It would be good to collect more data from this region to confirm this.

The species is only scarcely reported outside of the western forests of the city, with a handful of records from sites widely scattered around the main part of the city, and only a couple of reports from Moreton Island. There is not much suitable habitat for this species over on the island, so birds are probably at best rare and localised there; this is supported in the historical literature (Vernon & Martin 1975). The geographic distribution of Brown Cuckoo-Doves around the city is clearly predominately due to the availability of suitable habitat, although birds must wander to some extent, likely in search of fruiting trees to feed on.

As a result of their preference for wetter forested habitats around the city, Brown Cuckoo-Doves are found across a wide elevational gradient within the Brisbane region, and have been recorded from sea level all the way to the very top of Brisbane. Most reports come from around 150m in elevation, which is where the majority of the suitable surveyed habitat for the birds lies, so this is not that surprising.

The elevational distribution of Cuckoo-Doves shows no clear seasonal variation, although further data may elucidate a trend yet. Similarly, the geographic distribution of birds shows very little seasonal variation, with approximately the same sites occupied year-round. Records of wandering birds appear to have come from all seasons as well, indicating that birds are prone to wandering around the city regardless of the time of the year, although more investigation here would be helpful.

Brown Cuckoo-Doves are present in Brisbane year-round, with very little evidence of any seasonal variation in their abundance or distribution, as noted above. There may be two slight increases over autumn and spring, perhaps suggesting that some birds are passage visitors to the region, but given this species is not known to be regularly migratory (Higgins & Davies 1996), this seems unlikely and is probably the result of random variation in the data.

Unfortunately, this species is yet to be recorded breeding in the Brisbane region, although this is not that surprising as most of our pigeons and doves have very little breeding data associated with them, suggesting that they are generally quite inconspicuous when breeding. It would be good to collect any reports of this species breeding locally, to confirm that birds are always present in the region regardless of whether or not they are breeding birds, and to confirm when the breeding season is.

The reporting rate for this species over the Atlas period has been quite variable, with perhaps a slight increase over the past decade and a half, although this is not particularly well-supported in the data, and may be more a result of observer trends changing over the period. Similarly, bumper years in 2011 and 2014 are noteworthy, as are poor years in 2007 and 2009, although more investigation is needed to conclusively make any statements as to the causes behind these variations in the data.

Brown Cuckoo-Doves are clearly quite habitat-restricted, being poorly-adapted to non-remnant landscapes such as those seen in Brisbane’s suburbia. As a result, care is needed to ensure their favoured habitat types are preserved and this species is safeguarded against any potential future declines.