Limited to the wetter rainforests of Brisbane, a patchy resident and possible partial migrant. More records in cooler months, but no clear indication of local movements. Occurrence varies widely from year to year with no clear long term trend. Not of conservation concern, but dependent on the cooler forests of the Brisbane ranges, which are under threat.

The Striated Thornbill is a small, brightly-coloured thornbill with a distinctively streaked face and underparts (Menkhorst et al. 2017). Identification can be challenging without clear views, but their distinctive calls and brightly coloured bodies separate them from most other thornbill species in the area. Within Brisbane, Striated Thornbills are patchily distributed, occurring commonly at a number of sites with suitable wet forest habitat, but are absent at others. Given that the majority of the habitat within Brisbane in which they may occur is poorly surveyed, they may be more common than currently indicated. 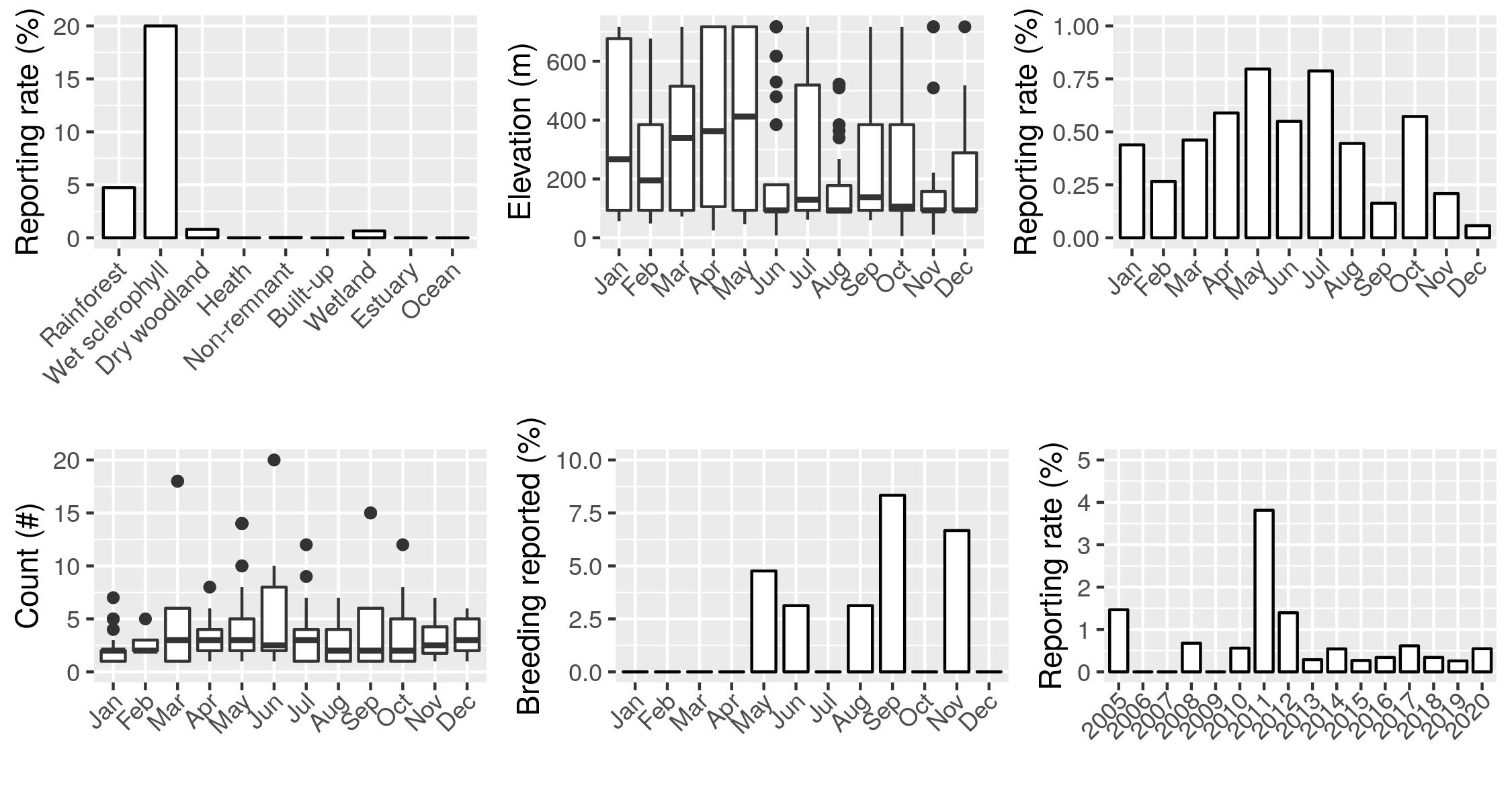 A common species across much of south east Australia’s woodland, the Striated Thornbill typically favours eucalpyt forests and feeds high in the canopy (Slater 1995), but within Brisbane it is more likely to be found in denser forest, especially the rainforests of the D’Aigular Range.

Striated Thornbills in Brisbane are, for the most part, limited to the north west corner of the region including the Camel’s head, and are typically only found at elevations above 200m. Their favoured habitat is wet sclerophyll, in which they are reported on over 20% of checklists, with a secondary preference for rainforest, where they occur on 5%. The species has only been recorded a handful of times in other habitats in Brisbane. Striated Thornbills never occur in high numbers anywhere in Brisbane, although counts of up to 20 have been reported (Tulloch 2017); typical counts are much lower, sitting around 3-5 birds in the majority of instances.

The species has been reported year-round in Brisbane, with no clear seasonal trend although there is a slight increase in reporting rate over the winter months, a possible indicator of birds moving into the Brisbane region during colder and drier periods in the interior. More work is needed to determine the exact nature of this movement, if it exists. Breeding has never been reported in Brisbane, but as the birds breeding season outside the region is known to be in the latter half of the year, and the species is present in Brisbane during this period, it is likely breeding does occur, but it has been unreported as yet.

For the most part, Striated Thornbills are restricted to the upper reaches of Brisbane, in particular the north west corner and the Camel’s Head, as this is where the majority of the suitable remnant habitat is. There are a handful of records from the eastern half of the city, but these are all one-off records, with birds only briefly moving through the area. The species has never been recorded on Moreton Island. There is a clear preference for higher elevations (likely associated with the habitat being more favourable at these heights), but no clear seasonal trend to elevational preference. Birds have been recorded from near sea level all the way to over 600m in altitude, but typically are found between 200m and 400m.

Current strongholds known for this species are at Mt Nebo and Lawton Rd, although given the paucity of records for much of the Camel’s Head (presumably suitable habitat for the birds), it is likely there are several more locations where they can be found in decent numbers. More birding in the north west of the city is needed to determine the true abundance of this species, and many others, within the LGA.

Striated Thornbills have never been reported as breeding in Brisbane, although given their presence year-round in the region and their overall scarcity it is likely that this is merely due to a lack of reporting rather than a lack of breeding activity. The species is most commonly encountered in June, where they are reported on just under 1.5% of checklists; even at their most frequent, they are a rarely encountered species. June coincides with the beginning of the breeding season reported in the literature, so it is somewhat surprising that no evidence of breeding has been found to date. The species is least frequently reported in December, being found on less than 0.2% of checklists. It would be good to determine the reason behind such a difference, and to determine whether this is related to observer bias (more birding activity on the coast during summer, more inland during winter), seasonal movements, or simply due to a lack of data resulting in unclear trends.

The reporting rate for Striated Thornbills has varied greatly between 2005 and 2017, with no clear trend in abundance. In 2006, 2008 and 2009 the species was unreported, while in 2011 it occurred on over 4% of checklists. This species is not of any conservation concern outside of Brisbane given its widespread distribution and abundance over much of south east Australia, but it is worth monitoring the species reporting rate in Brisbane to more accurately determine any trends in the local population.