Very common introduced species of built-up habitats around the city. Possibly experiencing a slight decline but no clear trend as yet. Not of conservation concern.

Widespread across the entire globe wherever there are humans present, the Rock Dove (or Feral Pigeon) is a large species of pigeon found in a wide variety of human-influenced habitats around the Brisbane region. “Wild” type birds are predominately grey all over, but an enormous variety of colour morphs and mutations are known, with some birds pure white, others brown and intergrades between variants being very common. Birds are gregarious and are typically found in large flocks of up to 100, although counts of as many as 400 are known from Brisbane. 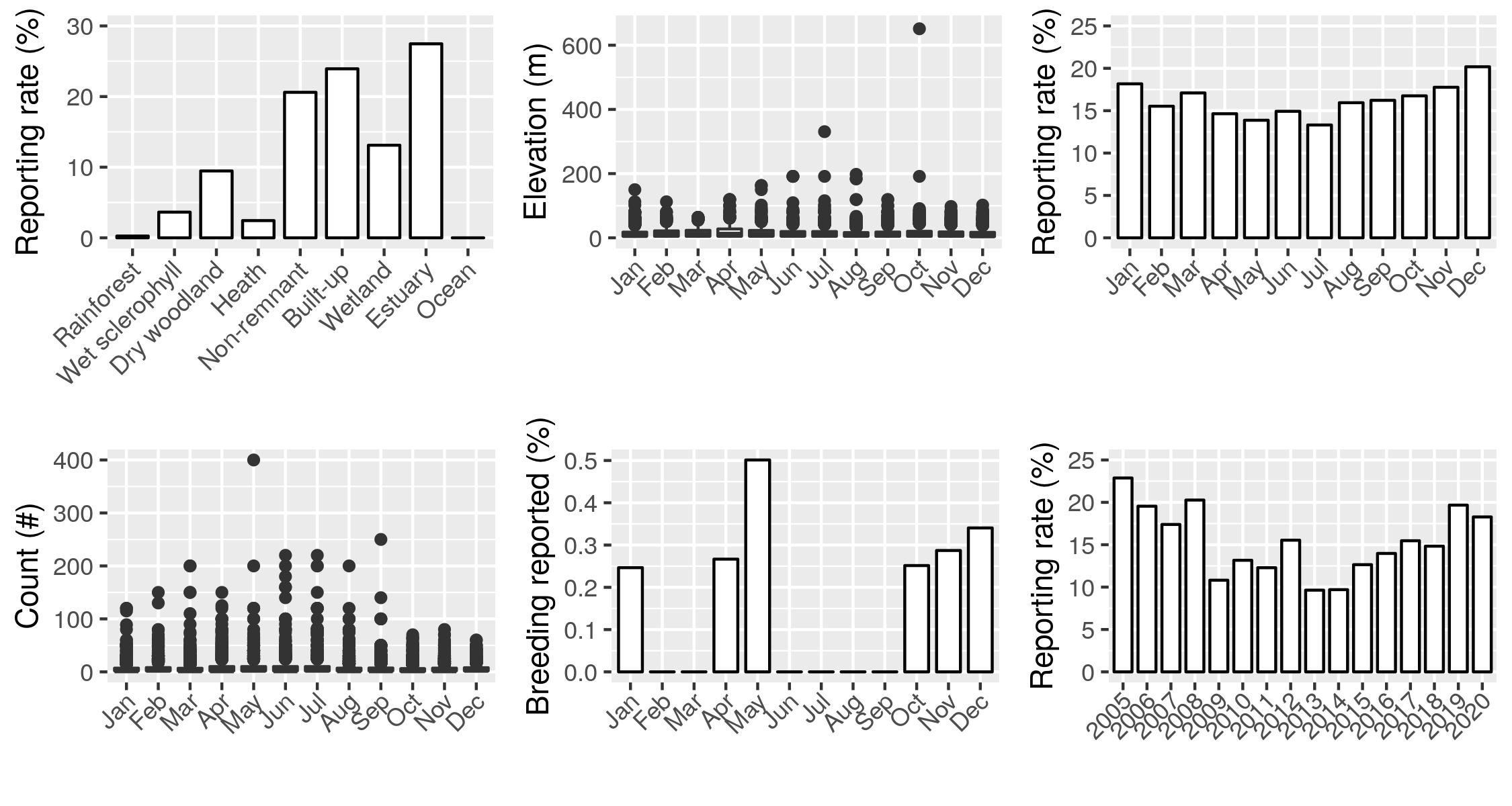 Domesticated by humans thousands of years ago for various purposes, the Rock Dove has a long and rich history with people. Native to Europe, north Africa and west Asia, this species spread around the globe alongside western colonisers and can now be found on every continent except for Antarctica. Within Australia, birds can be found widely across the landmass, being most common around cities and towns wherever there are people. Wild type birds are pale grey all over with dual black bars on the wing, but birds descended from domesticated stock can have an enormous variety of plumages, with more than 300 breeds known.

Feral Pigeons are highly gregarious, with an average count of nearly 10 birds per flock, and counts several dozen being common. The highest count is of 400 birds in one flock at Pinkenba in 1979 (Bischoff 1979). Counts of more than 100 birds have come from 10 different locations, including Oxley Creek Common, Kedron Brook Wetlands, Metroplex Wetlands and Luggage Point. The species is widely distributed across lowland Brisbane, and records do occasionally come from the higher parts of the city in the north west as well. Birds breed in Brisbane, although there are remarkably few records, and are present in the city year-round with no evidence of migratory or nomadic behaviour.

This species is incredibly well-adapted to human environments and does not appear to be at any significant risk. Interestingly, this species (as well as a handful of other introduced species around the city) may be declining slightly in numbers, with birds being less common over the past decade than the decade previous. More work is needed to determine the causes of this decline, if it is indeed occurring.

Rock Doves are found widely across Brisbane, but are by far the most common around heavily urbanised areas, including the industrial estates to the east along the mouth of the Brisbane River and in the city proper. Birds are more or less absent from the sparsely-settled western suburbs beyond about Moggill, and do not appear to be common in the Camel’s Head either, although some records from the region are attested. The species has never been recorded from Moreton Island nor the three inner islands of the bay, although may be sporadic visitors; more survey effort is needed to verify this.

Birds are typically found in the lowland regions of the city up to approximately 100m above sea level, although records up to 200m are not too uncommon. There are very few records above 200m; this is likely due to the lack of suitable habitat above this height rather than an actual elevational preference displayed by this species. Birds have been reported from a wide variety of habitats, but are by far the most common in non-remnant, built up and estuarine environments, with further records coming from dry woodland and wetlands. The geographic distribution of birds around the city is presumably driven by the distribution of these habitats. The distribution of birds within the city shows no clear seasonal variation, with approximately the same areas occupied throughout the year. It is possible though that birds wander locally around the city in search of food and habitat, although finer-scale monitoring than what is currently available is needed to confirm this hypothesis.

The abundance of Feral Pigeons in Brisbane shows very little seasonal variation, indicating that this species is a year-round resident that does not display any significant amounts of migratory or nomadic behaviour. There may be slightly more records in summer than in winter, but this is a very minor difference and possibly explained by a large number of factors. Despite their abundance across much of the region, there are very few records of this species breeding in Brisbane. There are only 2 confirmed reports of breeding, 1 of nest building in Shorncliffe (Woodall 2017) and 1 of an occupied nest in Stones Corner (Leach 2017). Many more data are needed here!

The overall prevalence of this species in Brisbane appears to be moderately stable over the Atlas period, although there is some evidence to suggest a slight decline in abundance. Prior to 2010, birds may have been more common, with a decline over the past decade down to a stable reporting rate of about 15%. It would be good to investigate this species’ historical abundance in Brisbane to verify this decline and determine any causes behind it. Interestingly, Rock Doves are just one of several introduced species to have experienced local declines, with Common Myna, Common Starling and House Sparrow having also declined over this period. Clearly, some detailed investigation is needed here.