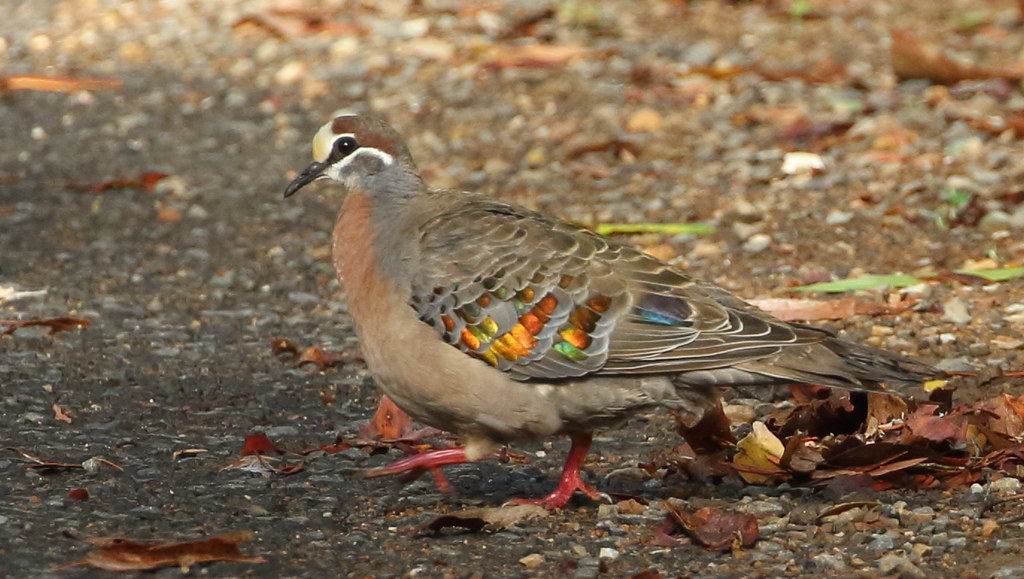 Very localised resident of western scrublands and forests. Present throughout the year, with some breeding records too, although monthly abundance patterns are unclear. Not of conservation concern, but population likely quite small and restricted.

The Common Bronzewing is a large species of mostly ground-dwelling pigeon, with plain brown tones set off by brilliant iridescent wing panels and an attractive face pattern. They are a localised species within Brisbane, and are typically found alone or in small groups, with flocks being unusual. They are found regularly at a small handful of sites across Brisbane, and occasionally wander to other sites where they may be recorded as wanderers. 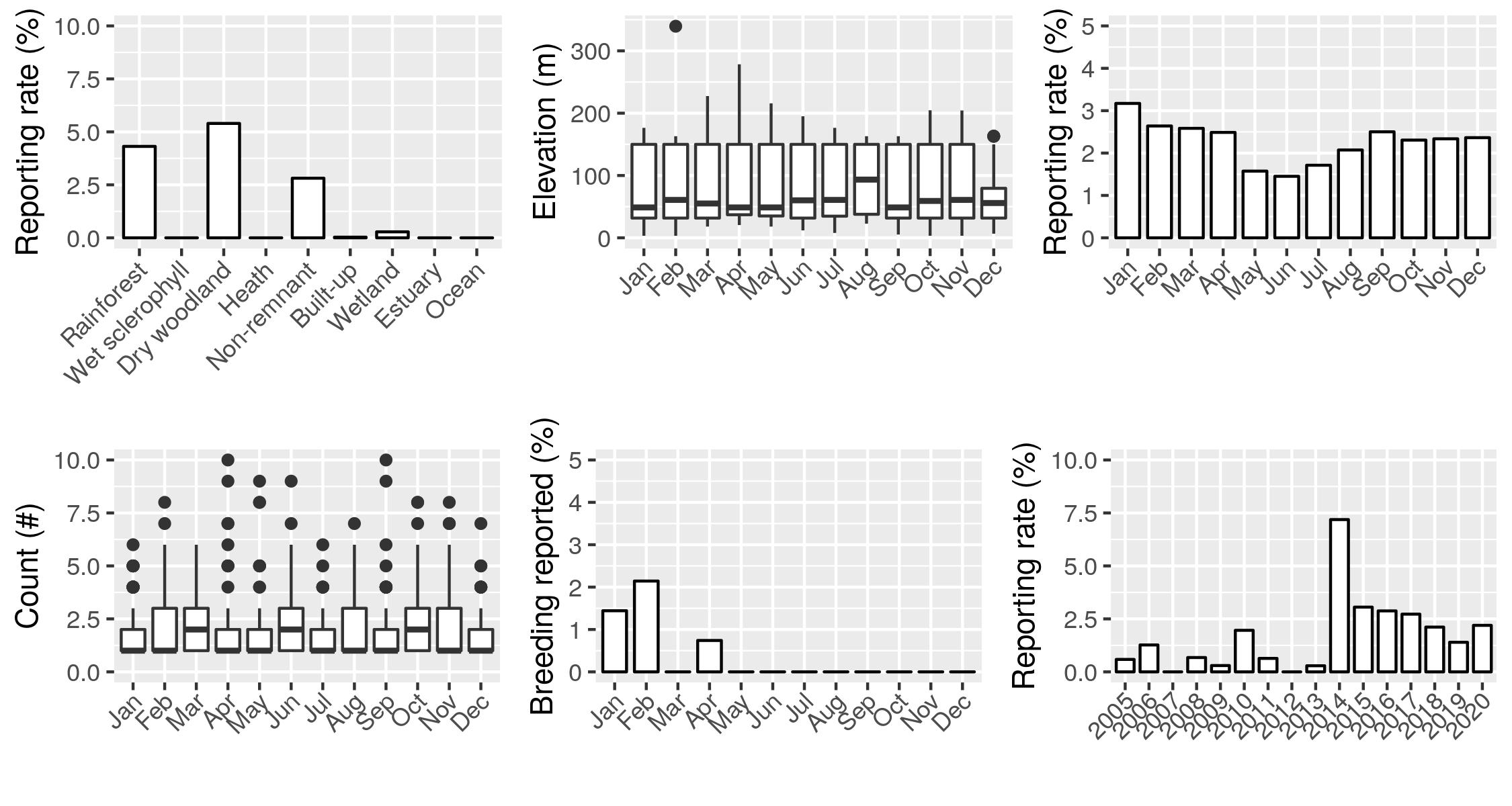 An attractive species of pigeon, the Common Bronzewing is a localised resident within Brisbane with the majority of records coming from a restricted area in the south west of the city, although birds may be more widespread in unsurveyed areas than current data suggest.

Birds are found across varied habitats, but typically favour dry, open woodland; further records have come from rainforest and non-remnant habitats mostly. They never occur in large numbers within the region, with most reports being of one or two birds and a high count of just 9 birds (Gardner 2009). Most records come from the suburbs of Pullenvale, Anstead, Kholo and nearby regions. Birds are present in the city year-round, although the month-by-month abundance appears to be quite variable, with a sharp drop-off in records at the start of winter, followed by a steady increase over the rest of the year into summer. The reasons for such a pattern are currently unclear.

Birds do not appear to be particularly threatened at the moment, and there is no evident trend in their abundance over longer periods, but care must be taken to ensure that large tracts of open woodland, which are favoured by this species, remain intact and suitable for the birds. Particularly important are the areas where this species appears to be concentrated: Lake Manchester, Anstead and Kholo.

Common Bronzewings have been recorded from a large number of Atlas squares across nearly all of Brisbane, but are concentrated in the south west beyond about Brookfield, particularly in the squares around Anstead and Hawkesbury Rd, Lake Manchester and Pullenvale. Other strongholds around the city seem to be in the south east, particularly in the woodlands around Tingalpa Reservoir, and the north west lowlands north of Enoggera Reservoir. There are no records of the species on Moreton Island, either in eBird or in other databases and the historical literature (Vernon & Martin 1975). This is somewhat surprising given the abundance of undisturbed open woodland habitat on the island and the species’ presence on North Stradbroke Island just to the south.

Within Brisbane, Common Bronzewings are found over a relatively distinct elevational gradient, being most common between 50 and 100m, although records below 50m and up to 150m are not unheard of. Such a distribution is likely reflective of the habitat preferences of the birds and the elevations of their regular sites. There is remarkably little variation month-to-month in the elevation of records, suggesting birds are resident in the same areas mostly all year. Little variation is seen in the geographic distribution over the year either.

Habitat-wise, birds appear to be found mostly in dry, open woodland, although the reporting rate in rainforest is also quite high. Interestingly, the species appears to be almost completely absent from forests intermediate between these two habitats - wet sclerophyll. More detailed analysis of records and more survey effort across the western forests and Camel’s Head would probably help confirm the habitat preferences of Brisbane’s Bronzewings.

Bronzewings are present in Brisbane year-round, and have been recorded breeding a handful of times. All breeding records are from summer (Jan-Feb); in the literature birds are known to breed all year-round with a peak over late spring - early summer, so it is possible that Brisbane’s birds may breed throughout the year (Higgins & Davies 1996).

The monthly abundance of birds appears to be highly variable, with some months being as high as 4% of all checklists reporting the species (Jan) and other months as low as 1.5% (May). Such a finding is interesting, especially given birds appear to be more or less resident in the same sites year-round. Within the literature, birds are reported to be largely sedentary but may be nomadic in certain conditions (Higgins & Davies 1996); nomadism may occur in Brisbane and may be the cause of such variation. More detailed investigation is needed here.

The reporting rate for Bronzewings over recent years has been quite stable, excluding a significant but almost certainly anomalous peak in 2014. It appears this is a species which has only recently been “discovered” by Brisbane’s birders in the sense that the vast majority of records come from the last coupe of years, and several of this species’ key sites (Anstead, Lake Manchester, Hawkesbury Rd) have only been intensively eBirded in the last few years. More long-term data are needed before a definitive statement can be made about this species’ status in Brisbane, but currently everything appears to be stable.