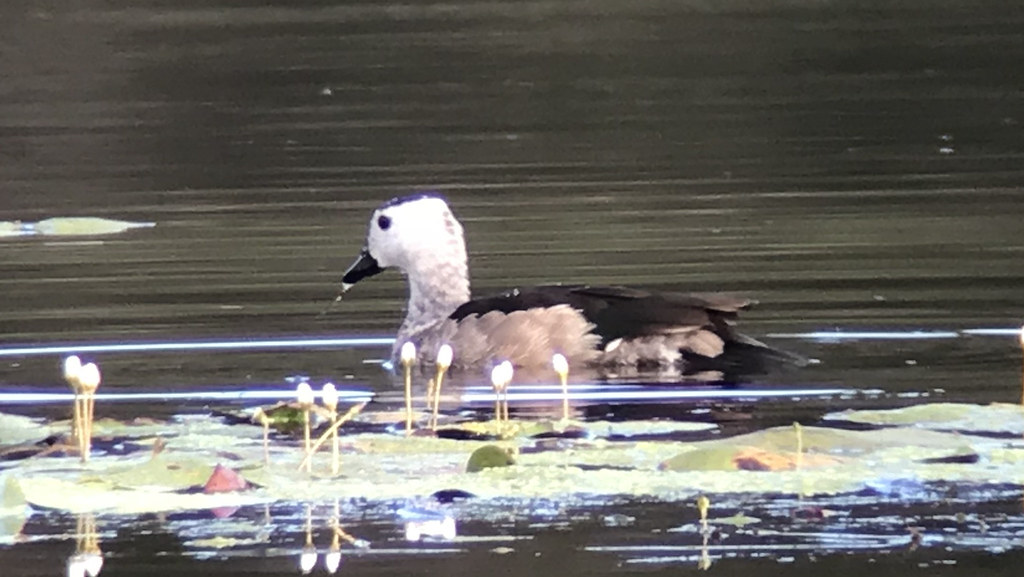 Rare visitor to wetlands across the city in winter. Occurrence fluctuates year-to-year, and presence may be associated with wider climactic conditions. Not of significant conservation, and Brisbane's birds only a fraction of the total Australian population.

A moderately common bird on wetlands and waterways across eastern Queensland, the Cotton Pygmy-Goose is a distinctive small species of waterfowl native found across much of Asia and along the Queensland coast from Port Douglas down to the Gold Coast. Birds are sexually dimorphic, with males being slightly more boldly-plumaged than females; birds are distinctive in all plumages and easily separable from any other local ducks, although the potentially vagrant Green Pygmy-Goose is superficially similar.

One of the world’s smallest species of waterfowl, Cotton Pygmy-Geese are a moderately common species of duck across eastern Queensland, but are only rare winter visitors to the Brisbane region, although there are records from all months of the year. They are almost exclusively restricted to wetland habitats within Brisbane, and are typically found in small numbers up to flocks of a dozen birds; the highest Brisbane count is of 14 birds at Dowse Lagoon in July 2018 (Tranter 2018b).

The Cotton Pygmy-Goose is widely distributed across Brisbane, with records from all regions in the city excluding the densely-forested north west, and Moreton Island. By far the most regular location for birds is at Dowse Lagoon, with consistent annual records dating back to at least 2012. Other nearby locations on the northside are somewhat regularly visited by birds; these are probably the same birds as at Dowse Lagoon wandering locally.

Cotton Pygmy-Geese are almost exclusively restricted to wetland habitats in Brisbane, with only a handful of records coming from other habitats such as estuaries or non-remnant areas. However, even in wetlands the total reporting rate only approaches 3%, indicating that the species is distinctly rare within Brisbane. They are mostly found at very low altitudes, with an average elevation of approximately 10m; the highest records are from 150m, indicating that Pygmy-Geese are a lowland species within Brisbane.

Brisbane’s birds are strongly migratory, being a clear winter immigrant into the region, although there are records from all months of the year. There are no breeding records from within Brisbane, although this is unsurprising as birds typically breed during summer with the wet season (Marchant & Higgins 1990), during which birds are typically absent from the region. It would be good to collect more information about the seasonal movements of this species and to determine where Brisbane’s birds migrate to during summer and where they breed.

The reporting rate of Cotton Pygmy-Geese in Brisbane has been quite variable across the Atlas period, with some years having no records and others having birds reported on as many as 3% of all checklists. Most recent years, however, have had birds reported on approximately 1% of all checklists, with no clear trend apparent. It is likely that these birds are somewhat nomadic, and as such their presence in the city is driven by extralimital climactic conditions, although more work is needed to verify this.

Outside Brisbane, the species is moderately common across most of its range in Australia, although has experienced severe declines in northern New South Wales and is now only a rare visitor to the state; the southern populations of this species, including Brisbane’s, should therefore be monitored for signs of any further declines.