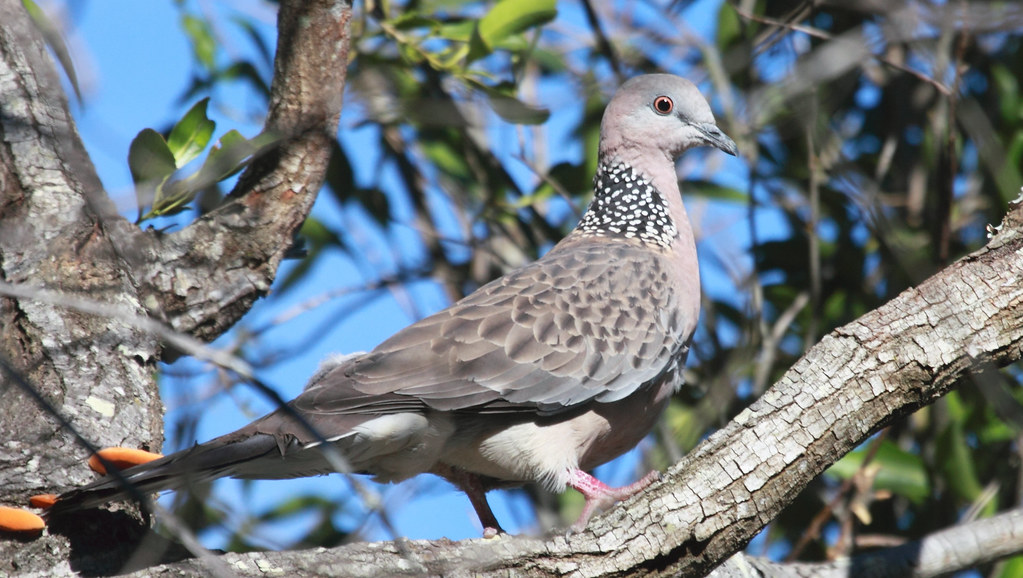 Common but decreasing introduced resident of human-influenced habitats around the city. Breeds during spring and early summer, although some breeding records in winter as well. Not of conservation concern, although decline is interesting.

An introduced species from south east Asia, the Spotted Dove is one of Brisbane’s most common species of pigeon, a small, predominately brown and grey bird with a spotted neck from which it gets its name. It is common across several habitats around the city, but is most abundant in suburban parks and gardens, where birds are typically recorded in small numbers and can often be heard calling to one another. Interestingly, this species appears to be steadily decreasing in numbers, but no cause has yet been identified. 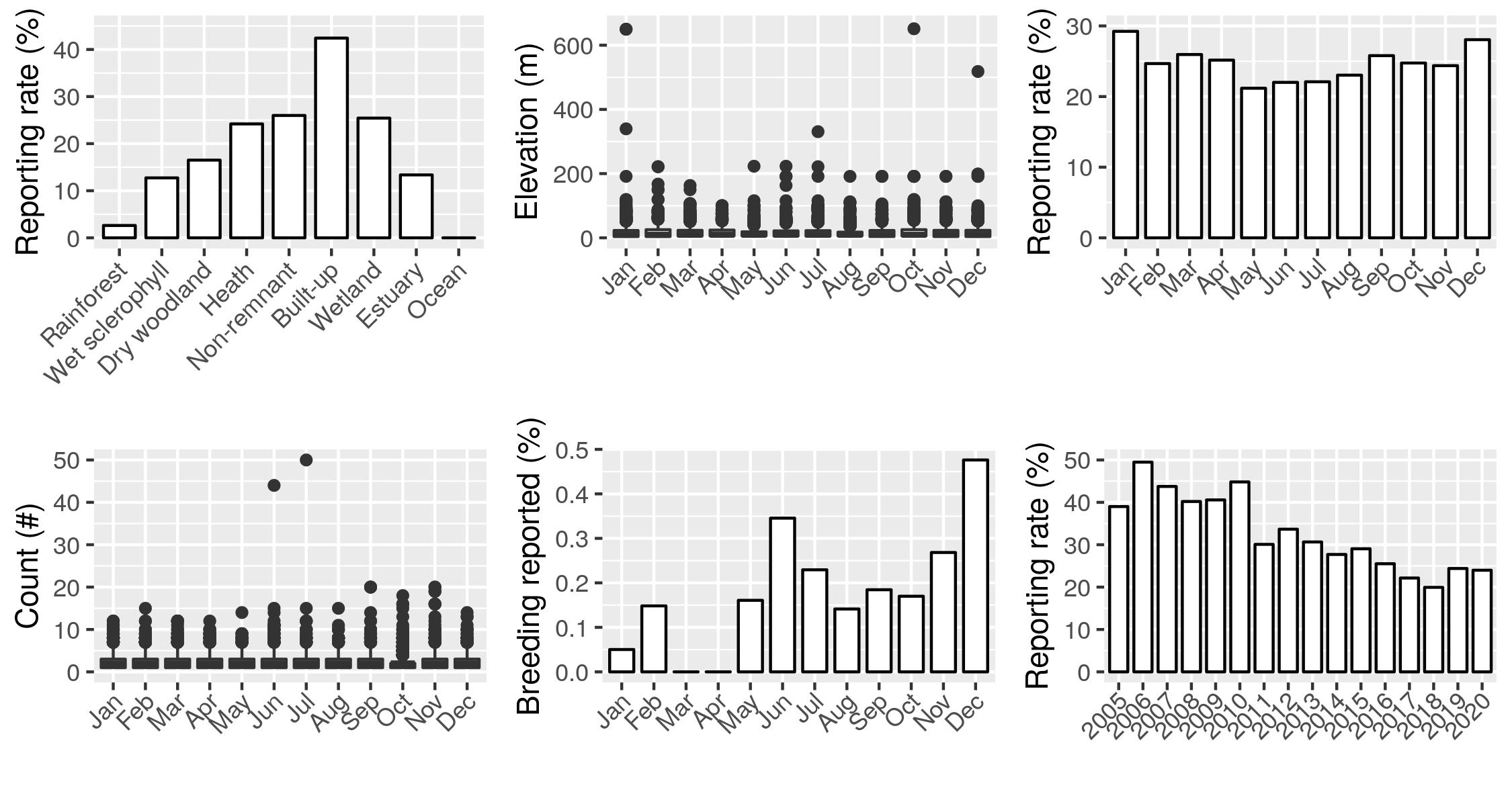 Common across parks and gardens throughout the city, the Spotted Dove is a familiar species to Brisbane birders, and can be heard calling throughout the day in almost any suburb. Identification is quite straightforward, with birds being easily separated from other species by their distinctive black-and-white spotted neck and unique call. Birds are somewhat gregarious, being typically found in pairs or small groups, although counts of up to 50 are attested (Skevington 1999). Counts of over 10 birds have occurred at more than 25 locations around the city, with the largest counts being at Oxley Creek Common, Karawatha Forest, Metroplex Wetlands, Fitzgibbon Bushland and Parkinson Park. Birds are present in Brisbane year-round with little seasonal variation, and breed locally, with a number of records throughout the year of breeding activity.

This species has experienced a marked decrease in reporting rate over the Atlas period, suggesting that birds are rapidly decreasing in numbers. The cause of this decline is unclear, and it would be good to determine if the factors influencing such a decline are affecting other species as well. As this is an introduced species and is common across much of Australia as well as its native range in Asia, birds are not considered to be of any significant conservation concern despite this decline.

Spotted Doves are found very widely across Brisbane in a wide variety of habitats. They are most common in the suburbs north and south of the city, and in some areas are reported on nearly all complete checklists. The appear to be more or less absent from the heavily-wooded forests of the west beyond Toowong area, and based on current available data appear to be at best uncommon on Moreton Island (and are yet to be reported on any of the inner islands in the bay). This species is more or less a lowland inhabitant of the Brisbane region, with the vast majority of records coming from under 50m, although there have been records of birds all the way up the mountains, including records of birds at Mount Glorious above 600m. This elevational distribution is likely due to the majority of Brisbane’s suburbia being lower down.

Birds have been reported from a wide variety of habitats, but are most common in human-altered environments, either non-remnant or built up. Birds are also common around wetlands, presumably as these habitats offer similar open ground and suitable trees like the built-up and non-remnant habitats do. Further records have come from estuarine, woodland and rainforest habitats, indicating that this species is well-suited to a large number of habitats. Birds appear to occupy more or less the same sites year-round, although notably there are a larger number of squares visited in spring than any other season. It would be good to determine the cause of this.

Spotted Doves are common in Brisbane year-round, and do not appear to show any seasonal variations in abundance aside from the slight increase in sites occupied over spring as noted above. Birds breed in Brisbane, with approximately a dozen confirmed records of breeding activity, from a wide variety of scattered sites around the region. Most of these records have come from this species’ normal breeding season in late spring - early summer although there are some records from earlier in the year (late autumn - early winter), indicating that birds may breed year-round whenever conditions are favourable. It would be good to collect more breeding data for this species.

Spotted Doves are one of several species in Brisbane facing local declines in population, but based on current available data appear to be faring worse than most. Over the Atlas period, the annual reporting rate has declined from about 40% to 20%, with further declines likely. It is unclear as to what the causes behind this decline are, but likely a number of factors are influencing it. It would be good to collect some more detailed trend analysis and further information to determine the factors behind this decline, and to understand whether such factors are also impacting other species.