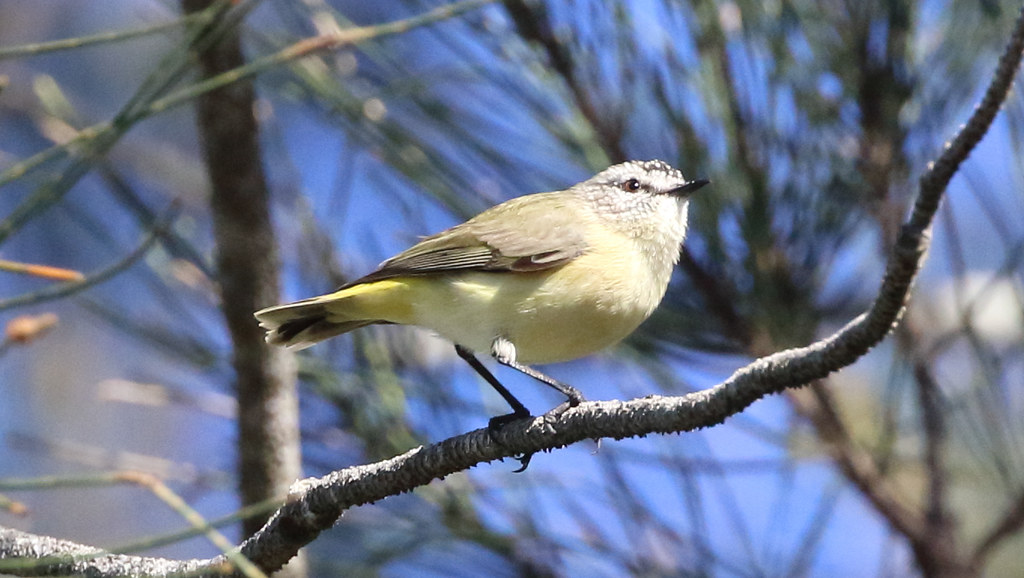 Patchy distribution within the Brisbane region, with only a handful of regular sites but many more locations where the species has occurred, often only as one-off records. While probably not of major conservation concern in Brisbane, it is worth monitoring for signs of population decline or reduction in distribution. Photo by Richard Fuller, Priors Pocket, 17 Jun 2018

The Yellow-rumped Thornbill is a distinctive small passerine with a bright yellow rump and conspicuous facial markings (Menkhorst et al. 2017). It is the largest species of thornbill, up to 12cm in length (Higgins & Peter 2002) and diverged early from other thornbills (Marki et al. 2017), consequently it is quite distinct within the genus. If seen well it can be identified easily, and its distinctive tinkling calls further differentiate it from other thornbills. Birds are patchily distributed in Brisbane and are only common at a few sites, but wander widely.

A species of open habitats, the Yellow-rumped Thornbill occurs patchily across Brisbane, but beyond our border is common across much of Western Australia, South Australia, southern Northern Territory and the south east States. Yellow-rumped Thornbill has been recorded from most districts across mainland Brisbane excluding the wetter forests of the Camel’s Head and the south east corner (and the species has never been recorded on Moreton Island), but it is never really common and typically occurs in small numbers. Strongholds are at Prior’s Pocket, Oxley Creek Common and the open country near the mouth of the Brisbane River. The highest count is of 12 birds at Oxley Creek Common (Possingham 2009) but typical counts are much lower, with only a handful of records over 5 birds.

The species is present in Brisbane year-round, although there is a substantial increase in reporting rate over the winter months, suggesting that birds might move into the city during winter, or our local birds might wander more widely at that time of year. The biggest counts also tend to occur in winter, suggesting immigration is a possibility, but in the absence of banding data it is difficult to be sure. There is no clear trend in abundance over the past decade, although there have been rather few records in the last 4-5 years, and the species’ abundance fluctuates from year to year.

The species is present in Brisbane all year, although there is a clear increase in reporting rate over the cooler months. Breeding records are currently too sparse to form a pattern, but so far breeding has been reported in June, September and October. It would be good to collect more breeding data on this species, and to find out more about its seasonal movements and any evidence of migration or nomadism.

The reporting rate of Yellow-rumped Thornbill has been rather variable from year to year, with bumper years in 2008 and 2011 (reported on ~5% of checklists), but much rarer in other years such as 2014, 2016 and 2017 (reported on about 1% of checklists during these years). It would be good to conduct some analysis to understand why these fluctuations are happening, but no clear directional trend is apparent from the data, suggesting we aren’t yet witnessing a wholesale decline. Outside Brisbane, the species is common across large parts of the continent, and as such is of no particular conservation concern nationally. Yet its apparent scarcity in Brisbane means it is a species that should be monitored fairly closely.