Widespread breeding resident across much of the city. Brisbane's commonest woodswallow, with more records over summer than winter but no clear pattern. Not of conservation concern, and well adapted to life in built-up areas. Particularly fond of powerlines and busy main roads.

The White-breasted Woodswallow is a small, two-toned woodswallow with a distinctive grey body and white breast. A gregarious species, they are well known for their tendency to perch tightly bunched together on branches or powerlines. Count of over 50 have been recorded, although average counts are much lower. Common at a number of sites across the city, and once-off records at many more indicates a degree of local movement or nomadism - a trait shared by other species within its genus. 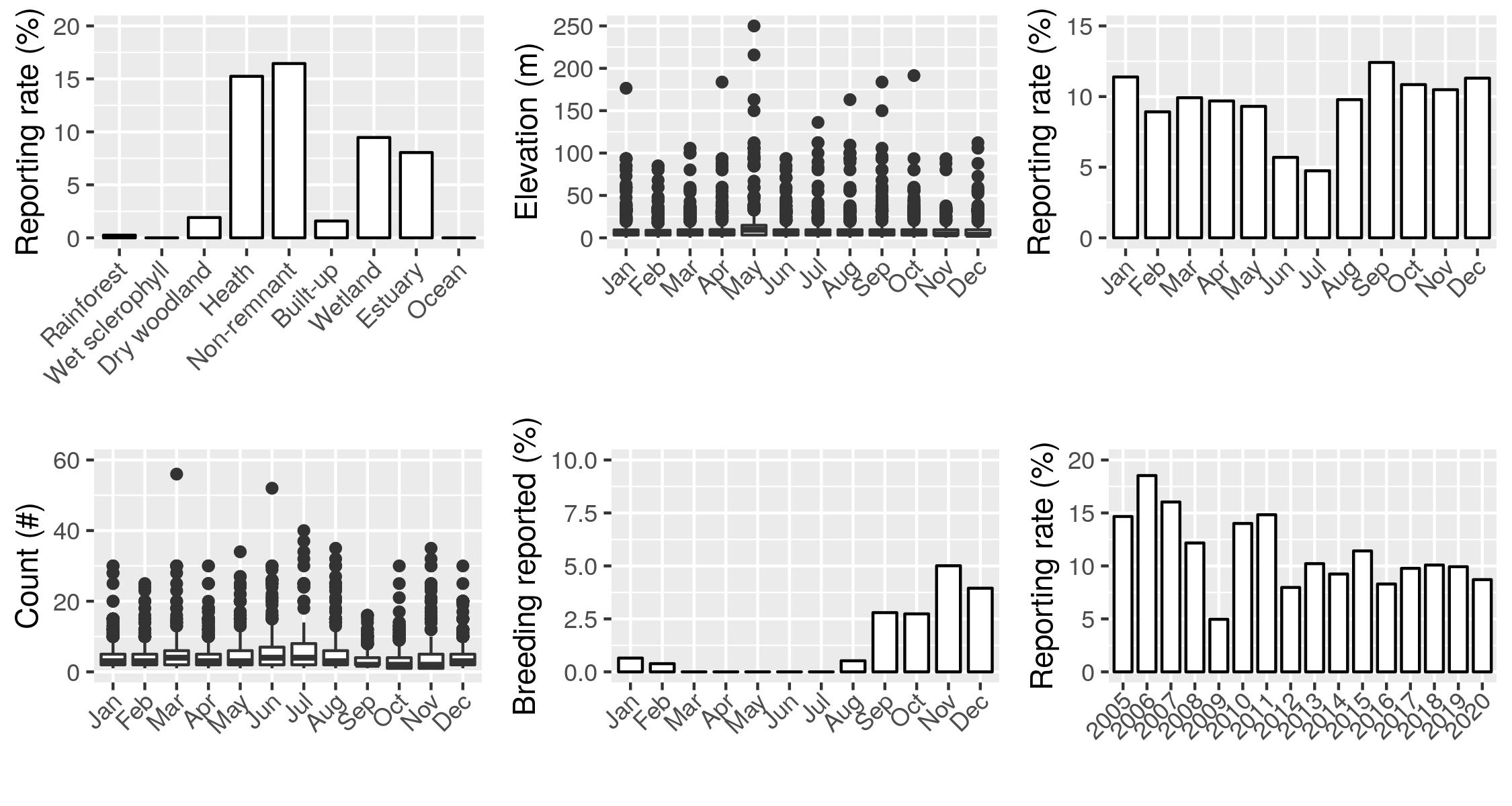 A gregarious species of open habitats and built up areas, White-breasted Woodswallows are common across much of north and east Australia and south east Asia. Widely distributed across the lowland regions of Brisbane, they have been recorded at many sites as wandering birds, as well as several sites where they are resident and breed. They are less prone to forming large, wandering flocks as the other species in their genus, but have still been recorded in significant numbers across Brisbane, with a high count of 140 birds at Shelley Road Park (Gardner 2018a). Most counts are much lower, although flocks of over a dozen are not uncommon. White-breasted Woodswallows are present in Brisbane year-round, although appear on approximately twice as many checklists in summer as in winter, indicating some seasonal movement around the area.

White-breasted Woodswallows are found across Brisbane, with the majority of records coming from the lowland eastern parts of the city at sites such as Kedron Brook Wetlands, Sandy Camp Road Wetlands and Oxley Creek Common. The species is only really absent from the north west region of Brisbane, which is higher and more densely forested; as the birds prefer open habitats this absence is not surprising. Birds have been reported from all parts of Moreton Island, although given the overall lack of data covering the island, more work is needed to determine whether the birds are resident breeders there or simply just moving through. Woodswallows exhibit a moderate amount of elevational preference, with the majority of records coming from near sea level, although birds have been observed up to 150m.

The distribution within Brisbane of the White-breasted Woodswallow shows no clear seasonal change, with birds being present in roughly the same sites across the entire year, although as noted above, there is a definite increase in abundance over summer (coinciding with the breeding season of the birds), indicating perhaps a degree of migratory movement. This species is known to be a partial migrant across other parts of its range (Chan 2001), so this finding is unsurprising. It would be good to find more sites for this species and determine the nature of their movements around Brisbane and South East Queensland. Currently it is not known whether our birds are mostly resident, nomadic or partly migratory.

There are 31 records of breeding White-breasted Woodswallows in Brisbane, mostly all in the months between September and February, indicating that the species is a spring breeder within the city. Nests with young have been reported in the months between October and January, coinciding with the months in which the species is most often recorded - present in over 10% of checklists. This possibly indicates that birds move into the Brisbane region to breed, although it is not known where they move to over the winter months (although many do remain in Brisbane at the same sites, as noted by the data). Breeding has been reported at 8 locations, with the most records from Sandy Camp Road, with a handful of further records at Oxley Creek Common and Sherwood Arboretum; most other sites only have one breeding record. It would be good to collect more breeding data for this species to determine the true nature of their breeding patterns within Brisbane as well as their local movements outside the season.

Reporting rate for White-breasted Woodswallows in Brisbane has been quite variable over the Atlas period, with some years having birds present in over 15% of checklists, and others only 5%. No clear trend is apparent, although there has been a slight drop off in the past five years. It would be good to monitor the species’ abundance in Brisbane to ensure that the birds are not threatened. However, the species is not of any major conservation concern as birds are common across much of Australia, South East Asia and the South Pacific.